Poisoned by Polonium: The Litvinenko File 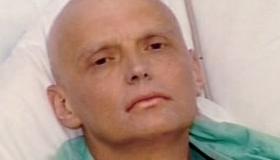 The whole thing felt like something from a Cold War-era Ian Fleming novel. Alexander Litvinenko, an agent for the FSB (Russia’s rechristening of the KGB) lay dying in a London hospital, his body being torturously destroyed by a radioactive element slipped into his tea, mostly likely consumed at the Millennium Hotel bar in Grosvenor Square. The grotesque image circulated worldwide, of Litvinenko’s shorn head and skeletal, resigned face, cast immediate doubts on the supposedly democratic reforms of Russian President Vladimir Putin. Indeed, it didn’t take 007 to discover that Litvinenko was murdered by FSB agents in retaliation for going public with improprieties committed by the organization under Putin’s direction. How Litvinenko came to such a gruesome end has the makings of a slam-dunk documentary. And for the most part it is, although director Andre Nekrasov’s storytelling is occasionally muddled as he oversells his case against an oligarchy whose criminal methods he’s scrupulously uncovered, thanks in no small part to his slain friend. Still, when Nekrasov stays focused, the documentary is a disturbing and eye-opening look at the new Russia (or, to paraphrase The Who, “Meet the new Russia/Same as the old Russia”). The topical subject matter and espionage angle should result in better-than-average box office for the genre.

Litvinenko only came to the attention of Western audiences as he was slowly wasting away in the hospital. But in Russia, he was a major whistleblower. Nekrasov had, in fact, interviewed Litvinenko on videotape for many hours, and the doomed husband and father spilled state secrets about the corrupt workings of the FSB and how the Russian government violently quashed internal dissent. Even when making the most damning, if not outrageous, claims, we never disbelieve him. He earns our trust simply by virtue of dying in such dramatic, cloak-and-dagger fashion. Plus, Putin always looks like he’s hiding something and Litvinenko’s murder only confirms the veracity of the dead man’s statements. Litvinenko, praised by a former boss as a “workhorse” who could stay awake for two or three days at a shot, raises eyebrows immediately with the videotaped assertion that the FSB was behind the 1999 bombing of a Moscow apartment block for the purpose of blaming Chechen rebels and starting the Second Chechen War (a charge later proven, as opposed to the claim that the Bush White House perpetrated 9/11 as an excuse to invade Iraq).

Nekrasov presents the background of the Chechen conflict, if not most background information, in a heady rush that bespeaks of a wronged and righteous party bear-hugging its chance to air serious grievances in a worldwide forum. But he drifts off track too often to ignore, failing to present the history of post-breakup corruption clearly. When Nekrasov gets into a groove, however, the film is a riveting insider account told in the hushed tones of good men who know bad things about their broken government, assertions made in poorly lit rooms under the specter of assassination. Litvinenko’s wife, Marina, provides one of the most incriminating pieces of evidence. It’s a videotape of Litvinenko and three other FSB officers being interviewed privately by a television reporter. The interview was informal, took place at 1:20 a.m. and contained casually articulated bombshell charges. During the interview, which was only to be released if the participants died, Litvinenko reveals life as an agent of a crooked system with too much institutionalized vice to turn itself around after the defeat of Soviet Communism and the subsequent hollow claims of democratic progress. Among other charges, Litvinenko says he was asked to capture a man because he had sued the director of the FSB. “I had to make him shut up,” he says. “That means beat him up ... or maybe just liquidate him altogether.” Litvinenko essentially accuses the FSB of picking up where the KGB left off, making life horrible for whistleblowers by “undermining reputations [and using] blackmail, threats, fabricating evidence, phony criminal charges  every possible means of subversion against its own officers.”

Litvinenko’s increasingly vociferous displeasure did not go unnoticed, and it triggered the avalanche that led to his murder. Litvinenko was tried, numerous times actually, but as one agent claims, judges are in the pocket of the FSB, routinely offered free flats or judgeships in better cities to proclaim an innocent man guilty (the government fired the judge who acquitted Litvinenko at his first trial). Eventually, he fled to London, in part to protect the safety of his 6-year old son.

By combining news footage, secret videotapes and interviews with cold warriors operating undercover, under pressure and under constant threat, Nekrasov creates a fascinating, hardscrabble sense of intrigue. In a time when terrorism has become the world’s overriding threat, Russia’s old-school reliance on shadowy agents who pour Polonium 210 into an enemy’s tea would be quaint if it weren’t so dangerous. As Marina says, ”If you get into the killing business, you might end up dead yourself.”