Poultrygeist: Night of the Chicken Dead 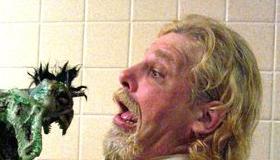 More precisely, that’s the basic script for Poultrygeist: Night of the Chicken Dead, the latest from the famous/infamous founder of Troma Entertainment, Lloyd Kaufman. With this setup—shortly after the employees of a fried-chicken franchise built on an ancient Native American burial ground discover a clutch of “mysterious, pulsating, vein-covered eggs” in the kitchen, the town of Tromaville is overrun by the feathered undead—it’s tempting to label this delirious satire as “finger-licking good.” But given the gross-out auteur’s fondness for gushing geysers of fake blood, excrement, vomit and assorted more-sordid bodily fluids, really, no one should lick their fingers after going anywhere near Poultrygeist. Still, this raunchy chicken-zombie epic is assured of cult-classic status, and properly promoted midnight screenings are guaranteed impressive per-screen averages.

When we meet our hero Arbie (Jason Yachanin)—like everyone else in the cast of characters, named after a fast-food franchise—he’s dry-humping his about-to-leave-for-college girlfriend Wendy (Kate Graham) good-bye in the Tromahawk Tribe burial ground. (Motto: “Desecrators will be cursed to the fullest extent of ancient tribal law.”) But when they reunite at the same site a mere semester later, the cemetery has become a military-themed American Chicken Bunker and Wendy has become a militant member of an organization named Collegiate Lesbians Against Mega-conglomerations (CLAM), which is picketing the nefarious franchise. To spite her, the disillusioned dude storms the Bunker and stalks up to the manager, Denny (Joshua Olatunde).

“Gimme a job,” Arbie pleads. “I’m a high school graduate just, just trying to make it in this topsy-turvy world. My life, it sucks. My parents are retards, and my one true love is a leftwing, lipstick-lesbo liberal.”

During the ensuing orientation, however, a chicken carcass dropped into the deep-fat fryer moans ominously.

“Say, Denny,” Arbie asks, “is it normal for chickens that have been dead and frozen for weeks to scream in excruciating pain like that?”

It doesn’t take a genius—fortunately, because none of these characters are geniuses—to see that fowl play is sure to ensue. Still, Kaufman manages to surprise with the extremes he takes his customary combination of low budget and high camp to in Poultrygeist: Night of the Chicken Dead.