close
As it turns out, you can’t forgive, but you can forget this film 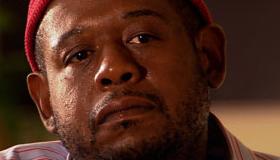 In writer/director/actor Philippe Caland’s latest film, many haughty philosophical questions are raised about forgiveness and redemption after a man’s hit-and-run catches up with him years later. Though in this moody, brazen assault on the spectator’s intelligences, the filmmaker paints a portrait not of stirring character study, but one of self-serving ego that gets carried away like the title’s figurative ripple. Notwithstanding the cast, which boasts the likes of Virginia Madsen and Forest Whitaker, Ripple Effect is likely to get lost in independent-film purgatory, with nowhere to ripple further.

Playing a Lebanese immigrant turned bohemian clothing designer, Caland stars as Amer Atrash—a man on the cusp of breaking into the fashion industry with his posh line. But before all goes swimmingly, the audience is presented with the most effective scene in the film: an inferred hit-and-run involving a frantic Forest Whitaker. From then on out, however, Caland’s sophomore directorial effort retains a loathsomely familiar film-school stigma of tactless editing choices, jumbled pacing and lackluster storytelling. How all this drama got stirred up, and moreover, how Caland enticed names like Forest Whitaker and Virginia Madsen to highlight his project are among many questions to aflutter.

Something is awry at Atrash’s place of business, and while it’s difficult to discern at first, what’s more frustrating is the film’s botched direction that operates only on pretense. We are forced to accept he’s a high-profile entrepreneur, married to a beautiful woman (Madsen) and in debt for $12 million.

Begrudgingly striving for originality, Caland’s exercises in self-gratification forgo the effort to inject integrity into the secondary players (i.e. everyone else), who are largely cast into the background as two-dimensional catalysts for the tortured artist. Even Whitaker and Madsen’s collective efforts eventually become subject to a lack of development or authenticity.

You can’t take it seriously.

Try as he might, Caland’s over-earnest efforts come off as laughably awkward on several occasions, notably in an ordeal when he fails to receive promised financial aid from a partner because he forgot to provide him with “pizza and beer.” The delivery and subsequent reaction on behalf of our protagonist is baffling as he sits in silence, scowling over his equally downtrodden wife—with whom he shows not an iota of chemistry, despite her sincere performance.

Fortunately, the often show-stopping Forest Whitaker as an optimistic, albeit pity-cased paraplegic with a convenient penchant for philosophy represents perhaps the one element keeping the narrative watchable and serves to uphold the backbone of Ripple Effect ’s theme.

Among its other bit players however, Minnie Driver shows up, if only to remind audiences that she still has a prowess for music, and is exploited (if not for a silly turn of events in the finale), for her name’s drawing power on the film’s poster. She’s not given much else to do, but then again, nobody but Caland really is.

If that wasn’t enough to suggest Caland had been reaching for big names to rake in an audience, it’s Kip Pardue’s unnecessary stint of a cameo that will raise another red flag. Not until after the credits roll is his character validated, and at that, warranted as a last-ditch effort to pound the theme into audiences’ heads one last time.

For all intents and purposes, Ripple Effect still manages to bore any intellectual crowd it may garner, doing too little too late to sustain any interest in its “twist” of an ending. By the time the secrets are revealed, Caland has solidified his work as nothing more than an elongated soap opera, sans the self awareness.