close
Cuts the renowned director too much slack, but is still a striking indictment of celebrity justice 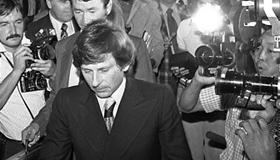 Though probably over-praised when it premiered during that hothouse of Tinseltown narcissism that is the Sundance Film Festival, Marina Zenovich’s Roman Polanski: Wanted and Desired is a lurid, fascinating and extremely well mounted analysis of celebrity justice, focusing on the 1977 legal proceedings against the world-renowned filmmaker for his alleged rape of 13-year-old model Samantha Gailey. Most film-savvy people think they know something about this case: That there were drugs involved (true); that Polanski pled guilty to a lesser count (also true); and that there were lurid (and, in this writer’s view, completely immaterial and appalling) questions raised about the victim’s responsibility for her own actions, as well as murky charges of judicial impropriety leveled at the presiding judge.

Murk there was in the case against Polanski, but coming from so many directions at once that it’s hard to believe Zenovich is able to make such riveting sense out of things in just 75 minutes. By deploying some of the documentary’s classical virtues—superb archival research, excellent interviewing skills and an editorial organization that presents a viewpoint but allows the viewer to form an opinion of his or her own—Zenovich has made a feature worthy of its eccentric and reckless central figure at his most cynical and embittered.

Wanted and Desired is like a legal drama as painted by Hieronymus Bosch, with garish threats of punishment and farcical backroom horse-trading played out against an odd and fumbling conflict between two cultures of impunity: the Hollywood superstar stratosphere inhabited by Polanski and his film-town friends and the absolute autocracy that is the modern court in the hands of an egoistic judge like the late Laurence J. Rittenband.

Polanski was unquestionably guilty of the crime he pled to (essentially, sex with a minor) and probably of most of the other, more serious charges leveled at him, and it was only the decision of his 13-year-old victim not to testify that spared Polanski the embarrassment of a full trial and the possibility of long years in prison. This left the officers of the court in serious conflict. They had a defendant they believed to be guilty and the evidence they needed to make a strong case for putting him away; but they had a victim so traumatized by the mechanics of the law and the hounding of the international press that she just wanted the whole thing to go away. The judge’s overt publicity seeking didn’t help matters. “He was orchestrating some little show that I didn’t want to be in,” Gailey (now Geimer) says in a contemporary interview, “and he didn’t care what happened to me.”

But the judge cared very much what happened to Roman Polanski, and as the case slips from accusation to negotiation and then into a kind of legalistic vigilantism, Zenovich finds her true subject—one closer to the films of Hitchcock than to Polanski’s: Can a guilty man be unfairly punished for crimes he probably committed?

It’s an important question, garbled somewhat by the way Zenovich at least tacitly makes a case that would release every other convicted felon in America—that Polanski is to be excused somewhat as the product of unfortunate and harrowing circumstances. Wanted and Desired allows ample if frequently uninformative room for all the special pleading that has accrued to Polanski over the years. The childhood trauma of his mother’s extermination and his father’s incarceration in the Nazi death camps are mentioned, if not delved into, and Zenovich lingers over the impact on Polanski of the horrific murder of his wife, the actress Sharon Tate, though Wanted and Desired can’t quite bring itself to say the name “Charles Manson” even once.

Such reticence is perhaps understandable in a movie that so convincingly chides the celebrity press for its sensationalism. Less explicable is Wanted and Desired ‘s complete failure to analyze Polanki’s film work beyond depicting it as the source of his celebrity and permitting an airing of the yahoo viewpoint that this modern master of the grotesque made films that somehow brought demonic curses down upon his head. When clips are used, it’s usually to show Polanski looking weird as a star in one of his own macabre pictures. There are many shots taken from 1976’s The Tenant, for example, though the movie itself is never once mentioned.

About the only attempt at auteurist analysis comes from the least likely source: Roger Gunson, the district attorney who prosecuted the case and who ran out to see Polanski’s pictures when an L.A. revival house capitalized on the director’s post-arrest notoriety by booking a Polanski film festival. “His films all had this theme of corruption meeting innocence over water,” Gunson says, still palpably excited by the ludicrous and reductive argument he never got to go to court with: That by having sex with a minor in a Jacuzzi, Polanski was living out a thematic fetish from his movies, only in real life.

Artists shouldn’t be tried on the basis of their art, and statutory rapists shouldn’t be able to cop pleas that let them substitute a 90-day psychiatric evaluation at a state correctional facility for hard time, but in an imperfect world, things happen. Whatever your position on Polanski’s films and on his guilt or innocence, Zenovich makes a convincing argument that justice miscarried and that Polanski’s decision to flee Hollywood for Paris rather than face sentencing by a rogue judge was not only rational but just.

By refocusing public attention on Polanski’s legal travails, Roman Polanski: Wanted and Desired may accomplish what 30 years of legal wrangling has yet to achieve: A public resolution to a shameful case of courthouse chicanery. That any final answer will likely leave almost no one satisfied goes without saying. In a world of murk like the one delineated in Wanted and Desired, sometimes the best you can hope for is another shade of gray.