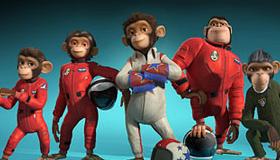 Some kiddie flicks can only be appreciated through the eyes of a child. Like, say, mine 15 years ago, when computer animation was new enough that a mere 3D chimp would have blown my mind. Now, I want texture and weight in addition to trifles like plot and jokes, and this banana-brained picture doesn't deliver. Parents will prefer shuttling everyone to a second showing of WALL-E.

Three aeronautics lab chimps, brainy Comet (Carlos Alazraqui), brawny Titan (Patrick Warburton) and beauteous Luna (Cheryl Hines)—an ape who really fills out her silver suit—are tapped to track down the failed explorer probe Infinity. To their local Floridian senator, voiced by Stanley Tucci, the trio are "chimp nerds." In order to give the mission some glamour (and his constituents some enthusiasm for the potentially billion-dollar fiasco) he taps Ham III (Andy Samberg), a circus performer who goes by the name “The Simian Satellite.” The immature, daredevil grandson of Ham I, who was the true-life first hominid in space (though dogs and squirrel monkeys beat him to the punch), Ham III is capitalizing on the family legacy by shooting out of a cannon for sparse crowds. He's the spawn of Evil Knievel, Bonzo and Dennis the Menace. Still, for whatever contrived reason, he doesn't want to blast off into the great beyond. Hi-jinks ensue—heroism is defined, chimp broads are won over, moral lessons are learned— you know the drill.

Writer/director Kirk De Micco and co-writer Robert Moreland wedge in a couple adult gags for the chaperones, particularly those born before 1970. A Ziggy Stardust reference zooms past the tots, as does a dance called the Monkey-rena and a Cloud of ID with an Austrian accent. The film feels not post modern but antiquated before its time—if it had been released in the ’80s, it'd do double the business as De Micco finds any excuse for retro synth pop. I counted three uses of Yello's "Oh Yeah" from the Ferris Bueller soundtrack and two separate dance sequences with The Robot. Similarly fixated on VH1 is evil alien Zartog (Jeff Daniels), who finds the Infinity probe on his planet after it glides through a worm hole—a trek that looks easier than most freeway commutes—and, after watching an infomercial about Earth, becomes obsessed with Robert Palmer, Las Vegas and global domination. His favorite trick is dipping his subjects in liquid freeze metal, which looks awful grim until we realize they just need to be broken free of their casing.

While we can partially forgive the animators for not fussing with details like fur, even though Pixar's had a grip on that since 2001's Monsters Inc., the art across the universe is particularly bad. The dominant alien species is meant to look jiggly, but is as swollen and shiny as balloons—cousins of the creatures who bop around late-night commercials selling ringtones. Other forms of life are living gumdrops that swarm together to form objects and a squeaky lemonhead-looking thing named Kilowatt (voiced by the pert Kristen Chenowith), who lights up and shrieks opera when scared. In perspective, bad puns like "Chimp my Ride" and "Chimprovise!" are highpoints.