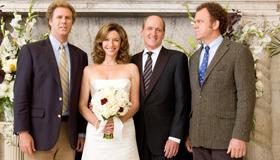 The pitfalls of elevating sketch comedy material to feature length are laid out like trophies on a mantle in this latest effort from the increasingly overexposed Ap Pack (as in Apatow), far and away the most prodigious tribe of the Frat Pack nation. Step Brothers and the forthcoming Pineapple Express, in fact, represent the Apatow factory’s seventh and eight films in just the past 12 months, and their fourth and fifth in just the first seven months of 2008—an output that would be entirely unobjectionable if even a small fraction were on par with The 40-Year Old Virgin or Knocked Up (as it happens, the only two entries actually directed by Apatow). Most, unfortunately, have turned out to be middling-to-bad, which is precisely the trajectory of Step Brothers, a tiresome misstep for the Talladega Nights team that’s unlikely to sustain much interest with any demographic beyond a largely marketing-driven opening week.

The story, as it were, concerns the rivalry between a pair of layabout live-at-home 40-ish goofballs who become intensely competitive stepbrothers when their respective single parents (Richard Jenkins and Mary Steenburgen) decide to marry. Dale (John C. Reilly) and Brennan (Will Ferrell) aren’t that different—both act and talk like spoiled, foul-mouthed 13-year-olds—hence the intensity of their initial dislike for one another. For a pair of developmentally-challenged adult brats, there simply isn’t room enough for two in one house.

Most of the comedy is painfully obvious. When Dale lets it be known that absolutely nobody is allowed to touch his drums, the only question is when—and with what appendage —Brennan will “touch” them; and when Brennan’s overachieving scumbag brother Derek (Adam Scott) shows up with his children and sexually-frustrated wife (Alice Hahn) in tow, the only question is which oversexed man-child will become her unsuspecting knight-in-dirty-T-shirt.

Granted, worse comedies have made do with even sillier fare; the greater problem here concerns the not-so-obvious material: interminable, largely improvised scenes of Ferrell and Reilly riffing off one another, intended “bits” that play like a continuous loop of petulant playground comebacks peppered with occasionally creative vulgarities.

It takes roughly 45 minutes for the film to start formulating some semblance of plot, but it’s too little too late—with so much time and energy already expended on failed comedic experimentation, there’s simply no way to reach any kind of resolution that makes even a whit of sense, nor any reason why audiences should care.

The last time producers Apatow and Jimmy Miller teamed with Ferrell, Reilly and director Adam McKay, the result was the exceptionally funny Talladega Nights: The Ballad of Ricky Bobby. That film, however, featured a rich, clever screenplay co-written by Apatow and Ferrell (echoing their previous work on Anchorman: The Legend of Ron Burgundy ). Step Brothers, by contrast, was authored by McKay and Ferrell—pals and partners since their Saturday Night Live days, when McKay was a writer and Ferrell a star-in-waiting—based on a story conceived with Reilly. While it’s anything but guaranteed that Apatow the writer could have salvaged such a threadbare concept (witness Apatow’s contribution, or lack thereof, to You Don’t Mess With the Zohan ), he surely could have helped his buddies sculpt something more cinematic and substantially narrative than the overlong sketch to which he has carelessly attached his name.