close
Latest Costner flick is deserving of your Vote 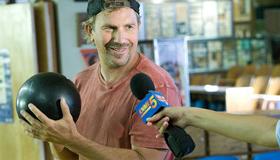 Kevin Costner returns to top form as a NASCAR-loving, beer-chugging divorced dad whose single vote will make the difference in the race for the White House. Slyly funny, pointedly satirical film goes all Capra on us in the last 20 minutes, but still retains its comical edge. Costner is a little past the peak of his box office prime, but his films sell particularly well in their DVD afterlife. As movies with political themes rarely top the charts, expect the crowd-pleasing Swing Vote to come up short in theatrical play, but strong word of mouth should help it ultimately run a winning campaign—after all the votes are counted.

With the outcome of the last two presidential elections coming down to a matter of a few votes in a single state, it was only natural Hollywood would take it a step further and create a scenario where the race for the White House comes down to a single vote in a small town in New Mexico. In this case, it’s from the unlikeliest of sources, as Costner plays Bud Johnson, a likeable loser who doesn’t even seem to know there’s an election going on in the first place. His socially conscious, whip-smart daughter Molly (Madeline Carroll) does, though, and secretly takes matters into her own hands by forging Dad’s name at the polls and casting a vote. When a sudden power outage nullifies her ballot, the bizarre circumstances of an electoral tie lead authorities straight to the trailer park where Bud is told he must re-cast “his” vote in 10 days in order to decide who will be the next President: right-wing incumbent Andrew Boone (Kelsey Grammer) or Democratic challenger Andrew Greenleaf (Dennis Hopper). The bulk of the film focuses on the media circus surrounding a national presidential campaign that is suddenly played out for one man’s vote. As both candidates and their staffs swoop down into the lives of Bud and Molly, all hell breaks loose with the fate of the free world in the hands of a good ‘ol boy who gets a lesson in being a responsible American citizen from his own little girl.

Although Costner’s current track record is a far cry from the heyday of Field Of Dreams, Dances With Wolves and Bull Durham, his recent choices of films like The Guardian, Open Range and The Upside Of Anger have won him good notices and audience loyalty—particularly in their theatrical afterlife. He’s terrific here in a tailor-made role that offers him the chance to show his comic chops mixed with a patriotic kind of Capra-esque sentiment that suits the star well. The supporting cast is top notch. Newcomer Carroll is perky, precocious and well matched with her n’er-do-well dad.

Grammer is slickness personified as the ultra-conservative commander-in-chief looking to save his job even if it means selling out his values. Hopper also hilariously sends up the liberal “green” candidate who discovers the way to Bud’s heart may be by taking a sharp right turn. Perfectly cast are Nathan Lane as Hopper’s perennially losing campaign manager and an ethics-challenged Stanley Tucci, who nearly steals the show as his opposite number on the GOP side. Lots of real-life TV pundits—including Larry King, James Carville and Bill Maher—turn up to comment on the fictional race.

Newcomer Joshua Michael Stern directs his own screenplay (co-scripted by Jason Richman) with great confidence and a solid flair for biting political humor. You have to be able to buy into his out-there premise, which may seem far-fetched to some, but in this era of hanging chads and Supreme Court-annointed presidents, Swing Vote could almost be a documentary.