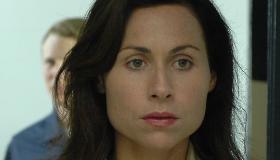 Perhaps fate is what links Ana, the overwhelmed mother of a learning-challenged boy (Bobby Coleman, Martian Child ), to a reckless gambling addict, Saul, in writer/director Charles Oliver’s debut feature film; or perhaps it’s just the storyline. But the questions that underlie the film’s overly dense narrative are most interesting. Take suffers from story overload, which is distracting—at least for this critic, and likely for paying audiences, too.

Indeed, it is the chain of events that lead to Saul (Jeremy Renner) and Ana (Minnie Driver) meeting, twice: the second time only moments before Saul’s execution. The filmmakers lay out what happens between these meetings, not so much like a jigsaw puzzle, but as a mix of several different memories about how a certain moment in time was reached. There is good deal of narrative in Take that defines these characters in the context of their lives, relationships, needs and wants, etc., all of which is textbook screenwriting fodder and completely superfluous.

The vicissitudes of fate alone are enough to leave one in contemplation of topics ranging from the validity of the death penalty to the limits of personal responsibility, to fate (if such a thing exists)—without all the excessively rambling plot. It’s the chain of events that triggers other casualties leading to the second, more tragic meeting between Saul and Ana—that does matter. It doesn’t matter that Ana’s kid has ADD, or that Ana is a loving mother or that Saul’s addiction is a disease. What matters is that choices were made and lives were transformed. And somebody’s got to pay for producing all that.

Or, perhaps, as the film suggests, an acceptance of the chain of events for itself—well, for that, forgiveness seems like a perfectly legitimate link.