close
Don't open the door for this mockumentary 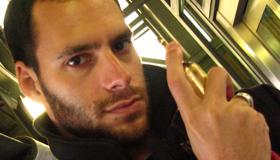 Slip this mockumentary into the “Not Worthy of Theatrical Release” file and head to your local dive bar for a drink. The Doorman profiles a fictional gatekeeper at trendy New York nightclubs and engenders sympathy for those who take that milieu seriously and something approximating pity for those who thought it was worth their time and effort to spoof. An ill-conceived and unevenly executed stunt, it belongs on the small screen, where it can be freely ogled by those with no hope of ever being allowed beyond the velvet rope at an Olive Garden let alone a hotspot frequented by boldface names. Other than aspiring Sacha Baron Cohens, or those with some personal connection to the project, the only people I can imagine being willing to pay money to see it are wannabe club-goers looking for tips on how to gain admission to exclusive venues. Once upon a time, back in the heyday of Studio 54, they were referred to as the “Bridge-and-Tunnel” crowd.

Actually, to give credit where credit is due, if his willingness to make himself look foolish is any indication, Lucas Aksoskin may be a legitimate pretender to Cohen throne. He assumes the role of title character Trevor W. with gusto. Aksokin’s chief collaborator for this guerilla exercise is director Wayne Price, and their success rate is about fifty-fifty. Where they go wrong is in not appreciating that no matter how broad one’s material, irony requires a modicum of subtlety and deception. The willingness to pose as the butt of one feature-length joke doesn’t automatically translate into satire. Sporting a mysterious foreign accent, gym-sculpted physique and handsome visage, Trevor draws back the curtain and invites a camera crew behind the scenes of his exciting lifestyle. He’s shown “taking care of his soul” in yoga class, getting fitted for stylish threads and reflecting on his chosen profession. “I know people who know me,” is one of his shrewder insights. We witness him in action during New York’s fashion week and on busman’s holidays in South Beach, Vegas and LA. Real-life club-owners such as Amy Sacco, habitués of celebrity society like photographer Patrick McMullan, plus the odd bartender and publicist testify to Trevor’s place in the nightlife food chain.

Calling it a goofy cross between Borat, Entourage and Waiting for Guffman makes The Doorman sound better than it is. Too much fun is made of Trevor; he’s deflated at every turn, and so the audience isn’t allowed to buy into the concept, risibly parasitic though it may be. There is a story arc. Halfway through, it appears: Trevor is no longer employed. He disappears, and the documentary crew has to chase him down. He’s too proud to admit he’s been fired. Something about not recognizing Nicolas Cage. Then he tries to launch a career as a pop singer, recording a version of “Ave Maria,” and interviews for a marketing position with the NFL. His attempt to become a contestant on Queer Eye for the Straight Guy invites speculation about his sexuality. The high point of The Doorman is a lunch meeting with Peter Bogdanovich in which Trevor, dressed the way he imagines a New Jersey mobster would, fishes for an acting job on The Sopranos. When we last see him, working as a greeter at a Petco store, it appears to be a fitting and only marginally ignominious end. At least Trevor seems OK with it. After all, a top-notch doorman can make any place seem exclusive. The same is not true of a feature film.