The Legend of God's Gun 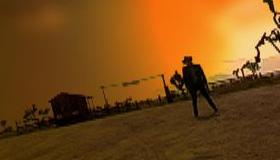 A feeble homage to the Spaghetti Western, The Legend of God’s Gun is about a vigilante set of horseless rough riders, the bumbling bounty hunter who trails them, the devilish preacher who judges them and their ultimate showdown in a limbo town called Playa Diablo. The whole thing is a contrived pastiche and a wily splattering of ubiquitous ideas lost in repetitive burned-out horizons. Though the script is pure drivel, lightning strikes in the post-production suite. With its clever title sequence, quick cuts and old-picture-show-flecked textures, it all could have worked as an animated film or an epic music video. Yet there are too many obstructions for a sober audience to sit still through the entirety of this slight satire, which will surely flop at any box office worth its celluloid salt.

It cannot be stressed enough that the writer plays a critical role in film. The director should have ceded this duty to someone who knows how to craft a sentence. Nothing in Legend adds up; there is no tension, and the attempts for laughs are petty at best. Tickling the satire bone is all well and good, but there needs to be something sturdy to lean on first. Writer/director/producer/editor Mike Bruce is over his head in this regard. He must have thought that by casting a bunch of rock ’n’ roll musicians instead of bona fide thespians and slapping together a wacky setup, that something would strike. The acting is more apropos to porn films where thin plots can float pre-coitus. The only compelling character is the deceitful Gunslinger/Preacher (Robert Bones) whose sinister portrayal is authentic. Everybody else is pretty useless and should stick to playing “Chopsticks.”

The camerawork is pretty nifty, with extra grip on the manual focus where dissolves fade into the sun, superimposed sequences summoning the psychedelic and kaleidoscope frames distorting reality. No tool or trick is held back: From a rainbow of gels on the camera heads to the bold cyans and yellows mixed in the telecine stage to the aged and brittled filmstock replete with flecks seemingly flying off the celluloid and disfiguring the characters in freeze frame as the projector’s hot lamp creates burn marks. All these technical tricks could have warranted applause, but die off as the actors blurt some mumbo jumbo and try to play it off as any garden variety Buster Keaton wannabe would.

The plot pedals aimlessly. There’s some bad guy named El Sobrero (Kirpatrick Thomas) who gulps scorpion venom like mother’s milk, and a man named Bounty Hunter (Dave Koenig) who trails him while dragging a corpse to town in pursuit of a reward. Bounty Hunter can barely complete a sentence. And as they shoot up the saloons and the bordellos like it was the O.K. Corral, we find a moral compass in the Preacher (who carries his own six-shooter inside a Bible). It’s all supposed to be rumble tumble, but the contrived nature of the direction stymies the gags. The narrator helps glue things together in the beginning, but he’s soon gone, as are those that try to keep up.

Anyone can watch a bunch of established films and decide that he can go out there and shoot, cut and compose like Leone, Welles or Hitchcock. Relying too much on machismo, the director and his troupe must have taken a bad dose of peyote and figured they could make a masterpiece after studying the films they adore. Not lost are the blatant gestures to the filmmaking geniuses that provided shoulders for these lesser contemporaries to stand on. The Gunslinger’s silhouette and the shift from black-and-white to blood red, smothering the gritty-textured screen, and the bullets zooming in and out lift a neck hair or two. But after the effects pass, the actors are forced to actually act and virtually everyone falls flat on his face. If Bruce was going for rock ’n’ roll Spaghetti Western, he actually achieved Spanish telenovela territory. In fact, the script would have had more pop if the English language were swapped out for Spanish.

There might be a subset of cats that find this fare fit for cult status. Then again, this would be the same burnout crowd that gathers in a circle to pass the peace pipe filled with schwag for a collective trip. Nothing wrong with that, but the taste filter gets skewed. The music video land befits this kind of work. Quick and painless, the format would grant the creators territory to showcase their special-effects prowess and utilize tunes to their fullest. Of course, there are few scenes in music videos where actual dialogue exchanges take place. But for the big screen, you need to have a little bit more than a magic show and snazzy titles to be considered legitimate.