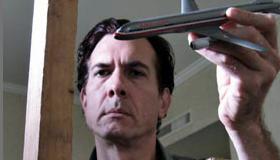 All the preparation and playbook memorization won’t deliver victory if, on game day, nobody executes. Such is the case in The Reflecting Pool, an overly drawn slog of a film, whose makers got sucked into sifting through heaps of research to indict the supposed framers of 9/11 rather than focus on banging out a solid performance. The dense plot makes pit stops with various players who factored into what the film is trying to sell: that the towers’ fall was concocted by various arms of government and calculating influences from up high so that another Pearl Harbor would sway public opinion into a war of the willing. One journalist’s assignment teams with one father’s determination to rectify the loss of his daughter on that tragic day, and together they go fishing to poke holes in the official accounts and testimony that was either omitted or discounted. For those who bothered to turn a page of a broadsheet in the last couple of years (as opposed to sitting with the two-minute segment on your watered-down local TV broadcast), there’s not much new information here. The idea of proving the conspiracy theories hold water through a narrative sounds well and good; however, the entire piece is chock full of flaws and no-show performances. Makes you reconsider the documentary as the more appropriate genre for a film of this nature. There’s no small number of folks who, ravenous for 9/11 goods, will sit through this wannabe All The President’s Men and go back afterward to verify if everything checks out. Others will save their funds and buy a couple of books and make their own assessment.

Jarek Kupsc wrote, directed and stars as Alex Prokop, an unhinged journalist with Russian roots. The multi-tasking is a big blunder. Kupsc lacks the capital to do all three. Add to that a pretty underwhelming performance by the entire cast, and you just can’t get into the material. Prokop is a putative writer for Sentinel Magazine, tasked with revisiting 9/11 to see if the all the members of the commission and the media got it wrong. His “smoking gun” is a VHS tape that centers on the “pulling” (euphemism for demolishing) of Building 7—the only building to go down that was not directly hit by a plane. The idea here is that after looking at the footage of the building symmetrically going down, it appears as if the other towers were destroyed through controlled demolition.

Prokop’s editor gives him his marching orders to follow the leads to New York and D.C., and to take along a sidekick, Paul Cooper (Joseph Culp), who lost his daughter on 9/11 and wants to ride the journo’s coattails to get a victory in a class-action lawsuit against the government. After Cooper explains that his daughter was killed in the first plane that hit the towers, Prokop offers only a bland “sorry to hear that.” Now a twosome, they powwow late nights in their hotel rooms, playing with wooden slabs that setup as miniature versions of the Pentagon or the WTC Towers while fiddling with photos of the various crashes as they map-out their strategy.

From the outset, Prokop’s character becomes the pessimist in the audience. He even seems to embrace some manipulation when he says, “we need propaganda.” Huh? See, the gumshoes interview a scrap-metal blue-collar in Jersey City who explains that the metal—essentially, the evidence—brought to the yard post-9/11 has since been shipped to China for recycling purposes. And then they chat up a firefighter doing circuits in the gym. He talks about how there was an explosion at the bottom of the building as well as the top of one of the towers, reinforcing the notion that explosives could have toppled the towers and not terrorists in jets. Still, the firefighter is entirely unconvincing with his account, and maybe that’s due to the fact that he doesn’t even sound a lick like a New Yorker. The back-and-forth between a fellow journalist on a rooftop, who suggests that the CIA and Secret Service used Mayor Giuliani’s bunker at the WTC site as a war room, is the best of the bunch because the actor playing the local reporter is authentic and quite convincing. But the pair interview military and private sector flaks and get nowhere because Prokop’s character feels the need to sounds-off every time, making his counterparts look like a bumbling bozos—powerless without cue cards. If the bulk of these meetings did, in fact, go forward, it would be hard to believe that they would end with such scrambling for attention because the need for information would supersede that for personal upstaging. Does the journalist want to get anywhere with his subjects, or is he trying to just teach us a lesson again and again?

Given the attempt to go after the juggernaut of government, it would seem as though the narrative format would fit the filmmakers’ message well. Yet, clearly, they overestimated what information they squashed into this work as being enough to land it as a complete piece. An onslaught of facts and sit downs that work to favor the pair and their pursuits hinders the creative vision entirely. It’s not enough to tell one side through scenes and reveal the futility of the opposition as a result. And despite the good insertion of a mock-Fox News talking head doing his shtick on a show evidencing how suspicious one outfit is on this issue, the whole thing becomes preachy. Given the fact that at no point is a fair shake given to the other side—at least one or two points by authorities can stick-up in the investigation—the officials are characterized as being outsmarted and caught-in-the-act. Makes you crave a documentary; even opting for Michael Moore’s circus over the narrative here. Rather than have important folks scripted to say nothing and behave so secretive, a shot of a politico slamming his hand into the lens would carry much more weight than all the set-up interactions.

It may be that the film is spot-on with its claims. There are certainly enough unanswered questions and too suspicious coincidences to suggest that something is rotten in Washington. But just saying as much doesn’t make for a great film. And when it’s in a narrative format, the acting, direction and most definitely the script need to be vetted for quality and not just fact-checked. The effort is a noble one, but let’s let documentarians carry the baton in this crusade for now.