close
Sight is worth a look

The Sensation of Sight 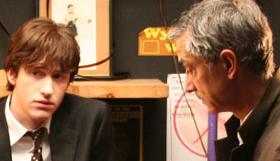 Aaron J. Wiederspahn’s debut film, The Sensation of Sight is deceiving at  well, first sight. Chronicling what only seems like one man’s life through several verses, the existentialist drama with a meticulously constructed story slowly curls open like an envelope over a flame, revealing an ensemble cast who’s running amongst each other while braving their own traumas. Sensation distances itself from the baggage of pretentiousness that often afflicts indie productions, and its astute American filmmaking will leave an impression with all who lay Sight on it, and provide quite a Sensation at that.

David Strathairn plays ex-English teacher Finn to perfection. At the onset of his retirement, Finn inexplicably takes up selling encyclopedias door-to-door via Radio Flyer wagon. Taking up the lifestyle of a nomad, Finn sells answers in books, but cannot find any for himself regardless of the introspection he provides in the picture’s monochrome flashbacks—each of which add a tiny bit more information to the fundamental tragedy for which Finn assumes both guilt and responsibility.

Surrounded by an outstanding supporting cast, Finn is far from the only one grieving. Jumping between the lives of a cadre of characters, Wiederspahn juxtaposes the lives of a single mother (Jane Adams), a moody loner (Ian Somerhalder), a troubled young man (Daniel Gillies) and a widowed father and his daughter (Scott Wilson and Elisabeth Waterson, respectively).

At the same time that Wiederspahn’s storytelling shows restraint and creates intrigue, it takes a bit longer than it should, so when the surmounting forces finally culminate, it makes for an intensely emotional finale. Albeit over-the-top, the cast’s efforts punctuate what would otherwise be an amateur attempt at drama.

Typically speaking, independent cinema is a dumping ground for “woe-is-me” schlock, but Sight sees past most of these pratfalls with undoubted tact in nearly every department.

Strathairn is both charming and empathetic in exuding his own brand of isolationism; he is as much a delight to watch as Bill Murray in Lost in Translation or Broken Flowers. Accordingly, Sight is not all gloom and doom, as it creates its share of awkward humor, even from some of the more sincere portions of the film.

Save for Gillies’ persistent character and Strathairn’s sporadic voice overs, Wiederspahn knows to shy away from excessive psychobabble in his existentialist story, but needless to say, some comes with the territory, and is present without going overboard.

The impression that remains after the credits roll, however, is of exemplary American filmmaking, whose direction and superb performances make up for a solemn script.