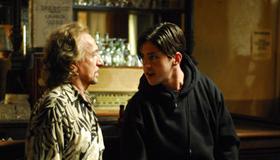 Bartering weed for the talking cure, Luke bonds with his wacked-out, wacking-off psychiatrist Jeff Squires (Ben Kingsley). When he discovers that they’re both stoners, that they both suffer unhappy home situations and loneliness, crave sex and, like many of us, hope the next new high will solve their problems and sweeten their sorrows. One is in late adolescence, the other is in late mid-life arrested development. The story gathers steam and hits snags when Jeff learns that his young client/dealer pines for his classmate Stephanie (Olivia Thirlby), who—it turns out—is Jeff’s stepdaughter. At first, the popular, precocious girl remains aloof, but as the summer heats up and her buddies flee to the Hamptons, she concedes to invite Luke into the exotic world of her family home on Fire Island when her parents’ head to Barbados in a last ditch effort to salvage their crumbling marriage. Jeff’s romantic pursuits vacillate between his attractive, but narcissistic and rejecting wife Kristin (Famke Janssen), and a rather unseemly make-out session with Union (Mary-Kate Olsen), a retro-hippie, in a phone booth.

The eminently watchable Kingsley—with his yuppie hair and his faux-New York twang—makes the film a lot more amusing than it would be without him. But I kept remembering his past portrayals, especially those of an ascetic, resolute Gandhi and Don Logan, the maniacal sadist of Sexy Beast, and interposing them with Jeff. As we’ve come to expect, Sir Ben steals the show (which isn’t hard). There are moments of poignancy and genuine existential angst, but Jeff (and none of the other characters, really) ever quite comes to life, never feels authentic.

The exuberant soundtrack, however, does work. Mid-’90s NYC means hip hop, big time. Tupac and Biggie still lived and Nas, OutKast and Method Man (who has a role in this film) ruled. The city itself also serves as a vibrant primary character. Of course, off screen, Giuliani’s efforts to eradicate crime and street art (and even what he considered questionable museum art) renders him mighty unlikable.

And the title? During a Q&A, Levine revealed that The Wackness is meant to “capture both the style and the substance of the film, the existential dilemma that our characters are going through.” Oh, okay. Well, whatever. There’s still space for future indie coming-of-age stories on the order of Brick, The Graduate and Garden State, but The Wackness isn’t one of them.