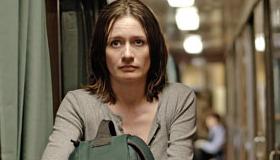 It’s been awhile since the concept of romantic train travel has taken a public-relations hit via a Hollywood thriller. Director Brad Anderson’s teasingly provocative new film won’t make the idea more romantic, but for 111 minutes, it does make it more thrilling. Give him credit for taking what could have been a cookie-cutter potboiler like Narrow Margin (the Gene Hackman and Anne Archer version) and, instead, creating a well mounted, character-cognizant combination of Hitchcock’s Strangers on a Train and Andrei Konchalovsky’s existentially tinged Runaway Train. Woody Harrelson gets top billing, but the movie belongs to Emily Mortimer ( Lars and the Real Girl ), who gives a full-bodied, sympathetic performance as a reformed wild child who gets caught up in drugs and murder while traveling on the Transsiberian rail line from Beijing to Moscow. Although Anderson’s film deserves better than its probable fate, with careful handling it could play like a higher-profile thrill ride. Best-case scenario, Transsiberian will result in greater success for indie stalwart Anderson ( Happy Accidents ), who continues to nudge his way up the ladder after The Machinist and now this terrific little nugget of suspense.

In terms of symbolism, trains are on the easy and obvious side, but Anderson’s eye for psychology adds intriguing layers of nuance. Roy (Harrelson) and Jessie (Mortimer) are a married couple and, much like the legendary train that’s seen better days, their union is also showing wear. Roy is a train aficionado, and after the pair finishes a church mission in China that also doubles as a marriage-freshener, they forgo flying and hit the rails. Their bunkmates are handsome Spaniard Carlos (Eduardo Noriega) and his much younger American companion Abby (Kate Mara). The two pairs become a travel foursome, and their interactions evoke a constant sense of low-grade dread, but one that’s fused to character, not plot mechanics. During a stopover, Abby prods Jessie to admit her wayward past as a teen runaway who spent time in jail and detox. But that was “pre-Roy,” and she’s hoping her gregarious bumpkin of a husband will straighten her out.
The pros and cons of spontaneity is a running theme here and, like life, the farther the characters travel from the journey’s safe, predetermined route, the more tenuous and dangerous things threaten to become. Events start to grow darker when Roy fails to board the train after a stopover, forcing Jessie to spend the night at the next town so she can locate her husband. Carlos and Abby graciously disembark also, giving Carlos a chance to shower in Jessie’s room with the door open and reawaken the sexually volatile side she forfeited for traditional married life.

Jessie’s layered mental state mirrors Carlos’ collection of Russian nesting dolls that hold the key to a mystery that’s drawn a Russian detective onto the train. Detective Grinko (Ben Kingsley, in a loosey-goosey performance the film needs) knows that the more things have changed in Russia, the more they’ve stayed the same—which may account for continuing to wear a busted watch given him by his deceased son. He also knows that the Transsiberian is a popular drug smuggling route, and he begins to eye Jessie when Carlos mysteriously disappears.

Like a classic Hitchcock hero, Jessie is an innocent tied to a noose that continues to tighten. But unlike many of Hitch’s characters, Jessie actually does have a secret (not to be revealed here) that gives life to Grinko’s claim that “with lies, you can get ahead in the world, but you may never go back.” Indeed, just when Jessie thinks she’s in the clear, Anderson and co-writer Will Conroy erect another tasty roadblock. But as Anderson dials up the anxiety, which Mortimer embodies with an everywoman sense of disbelief, Transsiberian starts to depend more on the questionable beats that come with genre plotting. By that point, however, we’re too invested in Anderson’s confident storytelling to really care. Anderson, who rode the Transsiberian line during a post-college sojourn, and DP Xavi Gimenez convey the wintry isolation that parallels Jessie’s own mental (if not physical) seclusion, while also giving the train the standard, yet not inappropriate, claustrophobic feel.