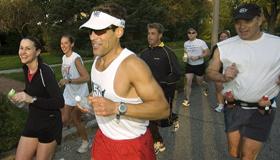 Dean Karnazes, at age 40 no less, ran 50 full marathons, in 50 states, in 50 days. Running a marathon every day for 50 days is an achievement, obviously, but consider that to achieve his stated goal, Dean had to travel to the next marathon location overnight, every night, for 49 nights. Even if this were a stunt or a Guinness World Records sort of thing (which it must be), it’d be noteworthy fodder for a documentary. For Dean, however, the undertaking was a combination of self-preservation after an early mid-life crisis, and a desire to serve a nation where an extremely high percentage of the population is overweight or obese. If every fat American saw this film, it’d make a billion dollars; this is not likely, however, so it will earn considerably less.

Effectively, the film follows Dean and his extensive support team to each of the 50 events, which included several actual marathons, but for logistical reasons, several re-creations of marathons in which Dean would run with a number of supporters, friends and family. It began in St. Charles, Mo., crisscrossed the country in a wild zigzag—including an overnight flight to Hawaii, a 26.2-mile marathon, an overnight flight back to the mainland and then another marathon. Along the way, he did press events ranging from The Late Show with David Letterman to speeches at farmers markets, all touting the necessity of people grabbing hold of their lives, which begins with your mind, or your body, depending on your point of view.

Over the course of the Endurance 50, Dean ran with cancer survivors and little kids and old ladies; he ran with newlywed couples and environmentalists; he ran with his own son on his ninth birthday and with his father; and he ran with veterans and a woman with one leg—and it was all just astounding. And incredibly emotional, which probably has a lot to do with the score, which is actually more of a collection of evocative cues from music supervisor Cody Westheimer, on which everything floats effortlessly, like a runner in the zone.