close
Latest Bollywood flick should please audiences both near and far 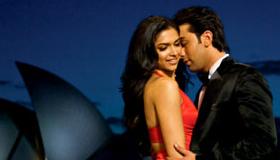 It’s no wonder rapper Snoop Dogg and actor Sylvester Stallone have flocked to Mumbai for cameo rolls in Bollywood’s sleepless cinema factory. The production values are skyrocketing—what with a hop to Capri and a skip to the Swiss Alps. Add to the blank-check budget a fan base well stocked and willing to get their paws on the supplemental paraphernalia beyond the picture, and you’ve got yourself a venerable industry. Bachna Ae Haseeno will not disappoint those who are craving for some loop in their fruit. A playboy yanks the love strings completely from two buxom babes before getting a bad dose of his own medicine when trying to court a third. Despite the sap spewing from this maple, it will delight sweet-tooth auds near and far; even compelling them to fork-up a couple bucks for the soundtrack.

It takes only a few seconds into the titles to begin the first choreographed music spectacular. Our main man Raj (Ranbir Kapoor), a glorified video game creator, sports a glittery fedora while doing a bronco stampede dance with a harem of female backups dressed in fishnet stockings writhing close with extra pelvic thrusts. Their attire changes with the beat from no-mercy getups a la ’80s neon to Las Vegas disco. At one point, Raj is breakdancing, and you think you’re watching a recreation of Ozone in Breakin’. Then the number ends, and it’s into the story we go. Raj stands before a postcard view along the Italian Riviera and narrates in almost a whisper: “I am a killer.” It takes a while before you realize that the word killer is not going to unreel a story about cloak-and-dagger tactics but lady-killing. It’s present time, and our hushed narrator in his white Elvis duds and aviators is a killer because he woos big-chested women with hearts of gold and leaves them dying at the stake for even a last glance.

There’s Mahi (Minissha Lamba), a youth of privilege who’s Euro-tripping with her family on a train. At 18, Raj is doing the same and chasing tail to boot with his three mates. Ultimately, the two make eyes, and after Mahi misses a train, the two are going by moped through the Swiss Alps to catch-up with her family in Zurich. Love blossoms on a bench, and the two lock lips. The downside is Mahi’s already fixed to be married to another. Raj still pursues her by stealing some chocolate truffles and writing a poem on toilet paper. Such the romantic! The montage sequence layered over a catchy tune where the pair are playing in a soccer match and racing in the Iditarod Trail Sled Dog Race all impress the fact that this guy travels far and fast despite his penniless status. Soon enough, the Romeo blows it by bragging lies about their affair and is caught in the act.

No matter. He’s got a chance to crumble another heart years later when he meets his next-door neighbor, this stunner named Radhika (Bipasha Basu), and puts on the charm. Soon enough, the two are intersecting at the mailbox and in the elevator, borrowing sugar for coffee. After Raj’s career gets a leg up, he must move to Sydney, Australia, he’s in a world of hurt to determine how to break it easy to his live-in girlfriend. He tries to do so through conversation, and she instead wants to get married. Cue the toilet flushing and plate-crashing sound effects. (These corny effects are repeated whenever things go south.) All attempts to wiggle out of the relationship backfire. Wedding bells hover and clearly Raj is not the marrying type. In Sydney, the video-game biz is flourishing, but Raj’s romance is floundering. Takes a wisecracking taxi driver, who happens to be a knockout named Gayatri (Deepika Padukone) to trip up the Indian Don Juan. When all his moves are proved tired, Raj goes for the gusto and tries to win over Gayatri.

The take on an old story of love thrice gotten and lost almost as many times is well and good. Raj goes back to appease the victims he ran over with his love cruiser without even glancing the rearview. Now fallen from grace, his conscience has kicked in and he gives a hoot. Raj promises at one point, “I never want to hurt anybody again.” Seeing him grovel and become a love guru so fast is a hard sell. But this is Bollywood, mind you. Fantasy flows through the water supply.

It’s nice to see a lead whose not injecting human growth hormone between takes. His frame is that of a Joe who sips a beer from time to time instead of Creatine. Then again, Raj is just your average video-game techie boasting voluptuous babes pining for his love and affection. The musical acts during montages are eclectic for this fare—a gondola carries lovers through canals, a deserted beach for two lovers, hip clubs where the revealing outfits the girls wear get the Hollywood treatment. It’s all quite flashy and tight.

In the case of this picture, it’s crucial to look at it with a measuring instrument taking into account the humorous elements and lovestruck plot. Yes, the thing can seem a bit hokey. The lead hunk is trying awfully hard to be this man of mystery. In some ways, he pulls it off. Could be his slick dance moves or the notion that there is good chemistry amongst the cast. You allow the extended music-video soap opera to carry on with its bouncy-ball plot without grabbing at it to stay still. It’s a well-balanced sauce with enough frills and not enough cheese to overwhelm the palette. And despite the long length (over two and a half hours) the film moves.

Director Siddharth Anand had a vision for this film and really took patient paces to mold together a witty and jubilant bit of cinema. The musical tracks keep the head bobbing, and the story has a universal theme that’s easy to grasp no matter how fast the subtitles move. It’s as if time stops, and you just get to play along with this ensemble of beautiful people (some perhaps got a little help from the science of silicon) who are trying to get to reach euphoria. The scenario of boy meets girl (in this case three girls) and finds something special, albeit through plying for scruples in each case, is old but happens to get a new coat in this film. Does the guy have this much sway with gals in real life? You have to doubt that. But at least on the big screen, the guy can have it all and smooch every girl he wants, have the cushy job, and however many times he falls, he still finds romance in the end. A film that can deliver this kind of escape deserves praise. And it will get it.