close
These Beautiful Losers are bound for DVD and cable 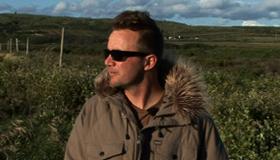 The ad line on the one-sheet for Beautiful Losers sums up this quirky documentary perfectly: “Make something from nothing.” That’s exactly what the filmmakers of this look at a group of influential artists who hit their stride in the ’90s attempt to do. It succeeds intermittently and is reasonably enlightening, but whether audiences are really going to warm up to the individuals presented here is questionable. Look for tough sledding at the box office even with Nike’s corporate muscle behind a marketing push. DVD and cable are where this baby is headed.

Director Aaron Rose and co-director Joshua Leonard seem to want to celebrate the innovative artistic spirit of the ’90s by focusing on a group of cultural outcasts whose cult appeal gives them a certain charm and influence. Subjects chronicled in this 90-minute collage are Shepard Fairey, Margaret Kilgallen, Mike Mills, Barry McGee, Jo Jackson, Chris Johanson, Harmony Korine, Stephen Powers, Geoff McFetridge, Thomas Campbell and Ed Templeton, who collectively cover areas ranging from fashion, music and art to design and film. Many of them grew up together in the shadows of New York’s art scene, gaining their initial confidence in less conventional venues like skateboarding, graffiti, hip hop, alternative music and deeply personal moviemaking. Yet there seems no clear-cut reason why we are watching them pontificate about their creations except that they seem to be friends of the director. As a group, they don’t really represent a renaissance movement of any import but admittedly are sometimes entertaining, even fascinating, to watch in action.

Rose and Leonard employ lots of different techniques to get the point across including some clever animation, but basically the appeal of the film is in the self-expression and enthusiasm of the outsiders, now mostly insiders who make up the “cast.” What Rose and company could have done better is explain how these unique creative innocents came to be, what really drove their independent streak and what informed them as artists growing up in a society that likes to celebrate the norm and the mundane. While we get a little of that, mostly we see where they are at now, all successful largely because they didn’t sell out.

You can probably argue that some don’t deserve the kind of adulation Rose heaps on them—Korine especially seems an odd choice, but like all the works of art on display here, it’s a matter of individual taste. One man’s masterpiece is another’s contribution to a yard sale. In the end, Beautiful Losers seems to be a mean-spirited title as no one remotely qualifies as a “loser,” if indeed that word is meant to imply the general public’s definition of living off the beaten path.

Ultimately Beautiful Losers is less about a defining artistic movement, and more about a series of small victories for some talented underdogs with strong visions and singular voices.