close
Toby Keith's slaphappy yukfest will do better on DVD

Beer For My Horses 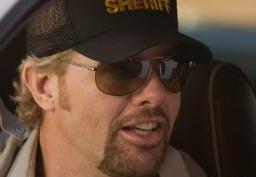 Oklahoman country singer Toby Keith made his reputation on blunt, nationalist anthems about the past glory and future promise of the U.S. of A.: ditties like “American Soldier” and “Should’ve Been A Cowboy.” “Beer For My Horses,” his 2003 hit duet with Willie Nelson, argued a deadpan solution to modern day corruption: one tall tree and a length of rope, singing “It’s time the long arm of the law put a few more in the ground.” Five years later, Keith and stand-up comedian Rodney Carrington have co-written a screenplay that transmogrifies his pro-lynching ballad into a slaphappy yukfest with two instances of pit bull flatulence and one close-up of said pooch licking his package. I groaned at the latter, but it’s still a civilized improvement over the original. Auds who love both but ain’t near screenings during its limited release should send DVD purchases through the barn roof.

Keith plays Rack, a good-time redneck deputy from fictitious Mangum, Okla. Rack is fine at smoothing over domestic trouble—when he bothers after the fun of watching dudes bash up each other’s trucks—but he’s a crap boyfriend whose girlfriend Gina Gershon ditches ASAP after he flakes on her birthday. Gossip gets around quick, and the townsfolk have fun screwing with Rack’s pride by asking him where she went. No matter, Rack has bigger catfish to fry: his old flame Annie (Claire Forlani, a lean, plasticine brunette) just moved back from the big city, and Sheriff Landry (a grab-’em-tight Tom Skerritt) has ordered Rack and his fellow deputies dopey Lonnie (Carrington) and silent-but-deadly Skunk (Ted Nugent!) to stake out a co-op where someone’s stealing fertilizer. (For those of ya’ll not from the meth belt, that’s a key ingredient.)

A humble comedy with a second-tier country star, the Nuge and a cameo by Mister Willie Nelson himself as a traveling circus man shouldn’t have to break a sweat to meet expectations. It doesn’t, though the eye-poppingly bright cinematography by Paul Elliott is as fine as a cold beer in July. Largely though, director Michael Salomon traffics in easy plot points like kidnapped damsels and land-grubbing farm barons (Barry Corbin), paired with casual sexism, copious booze and uncomfortable bigotry. I’m okay with a capitalist villain, but did all the other baddies have to be from south of the border? Despite Keith’s lyrical threats, most of the slayin’ is done, as it should be, by the Nuge, who at one point dolls himself up in war paint, shiny snakeskin and a samurai top knot before strapping on his crossbow for battle.

As a star, Keith has a boneheaded charm; he exacts a tad more respect than Larry the Cable Guy, and as such, the film’s several steps above the horrors of Witless Protection. Still, it’s odd that America’s country champion is content with a film that portrays your average yokel as a flatulent fool. (Imagine if Barack Obama said the same.) If them’s fighting words to Keith’s bourbon-swilling bard, he ain’t putting up a fight here. Though to be fair, my ex, an Oklahoman, was proud to call himself a “Beerbarian” and bragged about his friends who lit their special parts on fire as a party trick—a talent that’d fit in here just fine.