close
This Bottle isn't worth a taste 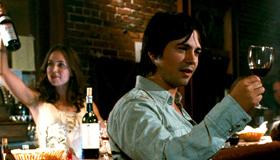 Based on a true story, Bottle Shock chronicles the event(s) that changed the landscape of the international wine industry forever, at least for people interested in wine. In 1976 American winemaker Jim Barrett (Bill Pullman) and British wine seller Steven Spurrier (Alan Rickman), through a series of unrelated events, and the brash actions of Barrett’s son Bo (Chris Pine), came together to provide California wines their first blue ribbon ever. Not long after that—wine in boxes! Box office will prove that except for Sommelier’s with a distinctive nose for this odd combination of comedy, drama and boring crap about wine, this vintage is not for the ordinary beer drinking moviegoer.

The term “Bottle Shock”—to get the really boring bits out of the way first—refers to a condition that turns lovely golden chardonnay’s brown, though without affecting their taste. It’s a bad thing. In 1976 Bottle Shock is what happen to the chardonnay that former real estate attorney turned vintner Jim Barrett’s son Bo, submitted to a not-so-prestigious wine tasting contest sponsored by Paris based English expatriate wine seller, Spurrier. Needless to say, though we will say it anyway, the sparking golden California chardonnay wins the quasi-auspicious event. To find out why you’ll have to sit through the entire movie. To do that, you’ll need to bring a little bottle something with you. Whiskey, perhaps.

Bottle Shock isn’t bad in any particular way; the acting is fine, the scenery is lovely, there’s even an obligatory love triangle between Pine’s beau, aussie actress Rachael Taylor and Freddy Rodriguez’s sassy Mexican field hand, while Dennis Farina provides comic relief against Rickman’s stoic British-ness. It should be noted that while Pullman’s portrayal of Jim Barrett as dour and mean is accurate, Pullman himself is a good bit taller than the actual man.