close
This doc is worth paying attention to 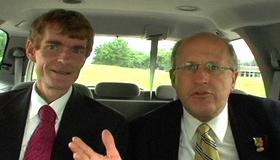 Brother, can you spare $175,000? If every man, woman and child in America ponied up 175 Gs each—yes, all 300 million of us—we could pay off our outrageous national debt. But we’d better act quickly: in the time it takes to read this paragraph, our global bill racks up another cool million. Sage audiences already concerned about their cash money will budget a few bucks to learn more; most aren’t and won’t, but will hopefully soak up the gist at cocktail parties.

Every generation since 1885 has been born into debt. Your grandmother never had to hock her jewels. Why should we care now? Dave Walker and Bob Bixby, the activist stars of Patrick Creadon’s unnerving documentary, have spent the last year on a Fiscal Wake Up Tour sounding the alarm for largely deaf ears.

Two problems compound today’s debt: Social Security and foreign loans. By 2050, 75 percent of the national budget will be allocated for Social Security, Medicaid and Medicare. The remaining 25 percent must cover oh, say, everything else from roads to schoolbooks, parks, museums and machine guns. During World War II, Americans loaded up on bonds to keep the nation economically independent. But if we follow our current pattern, the government will borrow the difference from China, Japan and the oil-rich Gulf States. They’re already holding the tab for 46 percent of our current debt. (We’re the world’s No. 1 borrower—worse, No. 2 owes only one-tenth of our debt.) What happens to our economy if just one of the three refuses to keep bailing us out ... or decides to collect? For an idea, consider Latin America. In the ’60s and ’70s, they were in debt to the U.S. and the World Bank and found themselves in the jaws of loan sharks with the power to oust their leaders, pillage their resources and ensure that the continent would spend the next half century playing catch up.

Bixby is an abstemious economist whose only indulgence is a stockpile of Tab. Cox was the comptroller general (aka America’s top accountant) from 1998-2008. Together, they break down the four major debt crises—trade, savings, loans, and leadership—and elucidate terms like the GDP versus the trade deficit.

For his end, Creadon and co-writers Christine O’Malley and Addison Wiggin do their best to muck up the clarity. The doc’s editing and structure are a mess, and the tone skips from plaintive to jocular with most of the humor coming from Saturday Night Live and Daily Show clips. Man-on-the-street pop quizzes seem designed to prove only that we’re a nation of idiots. We don’t need a teenager shrugging that our debts are probably in the millions to prove we’ve a culture with disturbed fiscal priorities. We spend more than we earn—the last time Americans had a negative savings rate was 1934. In the two years Creadon spent stockpiling interviews with Alan Greenspan and Paul O’Neill, we’ve gone from somnambulant to panicked. We need solutions. And in this election year, we’re ready to debate them if our media would can it already on Rielle Hunter and Michael Phelps. Creadon lazily orders us to a website for Bixby and Cox’s Concord Coalition. I’d rather he budgeted the 10 minutes to spell out the tough decisions our country must make: retool our health and retirement funds. Reclaim our factories. Readjust to the higher prices of American-made goods. Pay extra now or pay exorbitantly later.