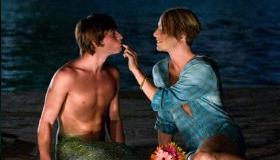 The sequel begins with a decapitation and an electrocution. Which is odd for a movie that’s really about nothing more than getting laid, with perhaps an aside or two about the perils of the heart amidst the joys of hedonism. The sequel finds the characters from the previous film, Andy (Jake Mosser), Nico (Jonah Blechman), Jarod (Jimmy Clabots) and Griff (Aaron Michael Davies), reunited at a gay resort in Fort Lauderdale. They fall in with the producers of a reality show called Gays Gone Wild!, the object of which is to see how much sex can be had by all over the course of spring break. Of course, this is no different than what happens on the straight version of the Gone Wild! series, but the gay contestants are in better shape and better dressed.

The film is built completely from an assortment of scatological sexual references and circumstances, pratfalls and genital jokes. Not having seen the original movie, one is hard pressed to make a comparison, or measure returning writer/director Todd Stephens ( Edge of Seventeen ) growth as a filmmaker. One is also hard pressed to imagine room for regression. And, it’s not like there’s any reason to grow with respect to this material. It’s mostly Pee Wee’s Playhouse on meth. And the filmmakers are, in fact, advocating nothing. Except maybe having a good time with good friends and high viscosity lubricants.