close
Cthulhu is an engaging horror entry that avoids excess 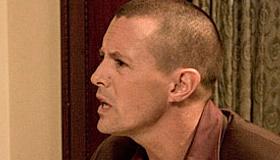 Cthulhu, an enormous fictional creature that arises from the sea and is (apparently) the progenitor of humankind, first appeared in several H. P. Lovecraft writings, including “The Call of Cthulhu.” Though we have yet to discern the correct pronunciation of this word (apparently neither did Lovecraft), we can recommend Cthulhu as a piece of engaging horror cinema that diverges from the contemporary mode that mixes horror and the excess (or “show”) of porn, including all of the Saw and Hostel films, The Hills Have Eyes series and all J-horror from 1983 to date. Cthulhu is horror cut from the cloth of such films as Rosemary’s Baby and the original Wicker Man. Which is to say while it’s plenty creepy, it’s also thoughtful, wry and kinda sexy. None of which will send audiences storming to theatres, but may spawn something of a cult classic if Lovecraft fans dig the interpretation.

Here, a Seattle history professor (Jason Cottle) long estranged from his family returns to his seaside hometown in Oregon to deal with his mother’s estate. His family is at the head of a not particularly secret new age religious cult that Russ denounced long ago. There are a number of circumstances at play in screenwriter Grant Cogswell’s story, including a gay theme that’s woven into the storyline in a manner salient to plot—rather than an expression of gay angst, or naked gay guys for their own sake. Not that there’s anything wrong with that. Still, there’s a reason for the maypole and all that naked gallivanting in animal costumes in The Wicker Man, and there’s a reason for the gay stuff here.

As the creepy gives way to the criminal, and ultimately to the genuinely supernatural, Cthulhu maintains its grounding in the sort of real-world interests that holds one’s attention without shocking demonstrations like dismemberment or decapitation. There is a mystery, and an old relationship to be reconciled. The Oregon scenery is striking, and also relevant. Lastly, Cottle, a little-known character actor, gives a great performance despite his lack of notoriety, proving the point that talent and fame are sometimes mutually exclusive.