Dare Not Walk Alone: The War of Responsibility 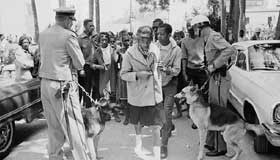 Homespun regional doc about climactic demonstrations of the Civil Rights Era in St. Augustine, Fla., rallies incredible and important footage to prove the limited success of the movement today. Film’s organization is mottled and undirected, which is a real shame because its stature as a strong thinkpiece for the movement and its offspring is clearly crucial. Yet, even with its flaws, film has the potential to do real good in the world, and with the help of savvy marketing could reach very eager audiences.

The more historically recognized demonstrations of the Civil Rights Era revolved around Alabama, but alongside those media-saturated events, fundamental and crucial battles in the struggle were transpiring (poignantly) in the nation’s oldest city: St. Augustine. As this town is reliant upon its tourist industry, it’s not so surprising the nucleus of activity was a motel. The first settlement for free blacks in the country, St. Augustine was no less a part of the South with its reigning racial tensions and segregated plots of land. In 1964, at the apex of the Civil Rights Movement, aided by the presence of the Rev. Martin Luther King Jr. and only days from the eventual signing of the Civil Rights Act, a group of young activists entered a supposedly unsegregated motel swimming pool. Pressured by the press and his customers to expel the swimmers, the motel owner dumped pitchers of chemicals into the water. Footage of this demonstration made national headlines and were key in the singing of the Civil Rights Act, which, this film argues, should not have put an end to the movement. This is where the text gets dicey.

From start to finish Dare Not Walk Alone is built on incredible archival footage. Director Jeremy Dean never foregrounds the non-violent resistance of the activists, (which other films might have made their raison d’être) and this tack ultimately becomes a very strong comment on the capacity of people to ascend from their suffering. It’s nothing short of breathtaking to see these demonstrations, and the clear and unmitigated cruelty incurred by these activists, from the points of view of general passersby. Their stalwart gentility and understanding in the face of violence and hatemongering is lastingly resonant.

Yet when Dean begins to show us the poverty, depravation and struggling among the black population of St. Augustine today, the film’s structure sort of falls apart. The previously sturdy essay organization of the film’s first half slowly unravels into a meandering collection of important but random vignettes about struggling, young locals. True, these day-in-the-life-style portraits prove the larger point that the movement is far from over, but they lack much cohesion and seem like the content of a second film on the matter, as opposed to a concluding point to this one.

Still, the film has a great potential, and one hopes it will be used well and wisely.