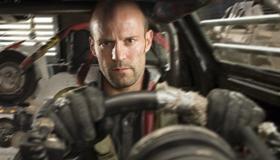 Way back in 1975, mischief-minded director Paul Bartel ( Eating Raoul ), producer Roger Corman and screenwriters Robert Thom and the great Charles Griffith created a low-budget cult classic in Death Race 2000, a culture and media satire based on Ib Melchior’s scarily prophetic 1956 story in which a futuristic America rallies around a race in which points are scored by plowing over pedestrians. It remains, to date, the only film that David Carradine (who also starred in the 1978 sequel Deathsport ) and Sylvester Stallone ever made together. Pity, that. Look for this one to score only with the gamer set, leaving everyone else in a cloud of dust.

What fans of the original will immediately glean from the quasi-remake, now simply titled Death Race, is just how prophetic Bartel’s film was  and how desperately the new film needs its forebear’s sense of irony.

As reconceived by writer/director Paul W. S. Anderson—the architect of such thematically vapid exercises in stylistic excess as Alien vs. Predator, Event Horizon, Mortal Kombat, Soldier and Resident Evil — Death Race now actually more closely resembles a cross between The Running Man and The Road Warrior, though even those comparisons offer it far too much flattery. Jason Statham stars as ex-racer Jensen Ames, a man simply trying to support his wife and daughter in the aftermath of a national economic meltdown that takes place in 2012 (high hopes for the next administration). But when an intruder murders his wife and frames Ames for the crime, he finds himself conveniently plopped into the privately-run Terminal Island Prison that has generated a national sensation with its gladiatorial Death Race, a pay-per-view internet phenomenon in which criminals compete in heavily-armored, ridiculously-modified vehicles to literally blow away the competition. The first man to win five races wins his freedom. Unfortunately, the race’s heavy/popular favorite—a masked marauder known as Frankenstein—recently died on the operating table, just one win shy of five. So as to not disappoint viewers, the prison’s hard-boiled warden Hennessy (a wasted Joan Allen), offers Ames a deal: don the Frankenstein mask, win one race and walk free. Assuming, that is, that the rest of the field—which includes Frankenstein’s archrival and three-time winner Machine Gun Joe (Tyrese)—doesn’t kill him first.

Just about everything here—from the setup to the so-called twists to the brutal race stages themselves—is culled from better movies, nearly all of them made in the ’80s: Robocop, Fortress, Escape From New York, the aforementioned The Running Man (also slated for a remake) and the Mad Max films, to name only a handful. Unfortunately, Anderson’s script doesn’t seem to be all that much interested in its own ideas—as a commentary on reality television, the internet and society’s various media obsessions, Bartel’s 33-year-old original is far more salient and wry. This is probably because Anderson’s core audience, the audience to whom the film is being marketed, are primarily gamers, hormonally-driven post-’80s-era fanboys whose interest in satire and pop culture stops where the latest edition of Grand Theft Auto begins. No surprise, then, that Death Race ends up looking and feeling more like an ultra-explicit video game than a story, a frustrating waste of a movie which nonetheless has to be regarded as a middling success insofar as it delivers precisely what it’s loathsome target audience expects.

The lone bright spot: Ian McShane as the wizened mechanic and prison sage known as Coach; not enough to make it worth recommending to grandma, but certainly enough to occasionally alleviate the ennui of watching an otherwise endless cavalcade of fire, twisted metal and blood.

Those seeking a meatier, savvier satire on reality television would do well to look up the little-seen 2001 indie Series 7 or else wait for American Idol to start handing out guns.