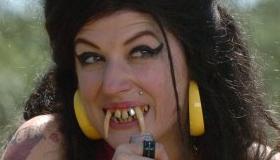 It’s difficult to either compliment or insult Disaster Movie, a film that so surely aims (and succeeds) at being bad that the conundrum of quality it creates is almost too convoluted to reward or punish with commentary. With this variety-show lambaste of recent cultural icons hung loosely on a thin plot (only partly based on the disaster genre), spoof-meisters Jason Friedberg and Aaron Seltzer have again contributed a product that, as far as I can see, exists to induce groans from the audience. Is this a goal? Paying $10.50 to groan at the poverty of a picture? Did no one see Idiocracy ? The next step in derivative scripting might be Ass, again starring Carmen Electra. Though I think this, I saw the film in a thin crowd, who laughed often and on cue, which leads me to believe, (as was previously dispelled by Eric Lundegaard on Slate ), that people will see some bad movies no matter how fervent our discouragement. Yet Friedberg/Seltzer films are in perpetual production, leading us to assume that the producers, like their Enchanted -inspired meth gutter princess, may keep pulling the (sour)dough out of their asses.

To its credit, the film gets off to an immediately spoofing start: we begin in 10,001 B.C., as our protagonist (Matt Lanter), saddled with a bad dreadlock wig, runs from a mammoth. To describe this in complete sentences would miss the film’s random senselessness. The caveman runs into an American Gladiator who woofs and tries to sell his own energy drink called “Woof Baby Juice,” but while shilling gets hit in the crotch, and a saber tooth, who turns out to be Amy Winehouse, lurks from the bushes and downs a bottle of tequila and burps for something near three minutes, before warning the caveman of the apocalypse to come on 8/29/08. There’s also something about Winehouse’s convict boyfriend, with whom she speaks on FaceBook, via her saucy MacBookAir.

So the end of the world is the film’s release date. It’s as if Friedberg and Seltzer know it’s their devil spawn that could kill us all. Does this harken back to the commentary previously made on the destructive tendencies of action films? Already, this reading is bordering the incestuous—and I haven’t even reached the part in the story where there’s a rousing rendition of “I’m f**king Matt Damon,” in which every actor in the massive cast sings that s/he is dating a different pop icon, who is inevitably dating another pop icon/ Disaster cast member. This is just proof incest is easy. I mean, cats do it all the time.

The core of the film is a Cloverfield -style fight/journey in which precious little opportunity is taken to comment on pop-culture references, and plenty of opportunity is taken to ape them. It all reeks like designer-imposter fragrances. (This bottle is called “McLover.”) At one nearly important moment, the cast is at a sweet-16 party—thrown by the 25-year-old protagonist who explains “but I never had one of my own”—in an upscale loft like the overly bourgeois flat featured in Cloverfield. The cast learns (by radio) that a gas main erupted and “blew up the ghetto.” The cast gives a collective shrug. But when they learn a Pinkberry’s been blown up, they run for the hills.

The second and final moment of import comes at the death of Juney (Crista Flanagan), the film’s Juno surrogate (and cultural/referential punching bag). During her destruction by a trio of rabid Chipmunks, she maintains her quippy jargon while the other three cast members lifelessly comment on how annoying her “overscripted cleverness” continues to be. (Ironically, Juney saved two of the assaulted cast members just moments before, but let’s forget ethics.) The cast of brainless blockbuster characters watches the (high budget) indie icon get mauled by mechanical rodents, and they take no action—moreover they just sorta wait it out. Friedberg and Seltzer can’t have ignorantly installed this apparent comment here. I half expected to see the spoof-making team in direct address, explaining the supremacy of the tentpole uber-alice, perhaps while backed by Emperor Palpatine.