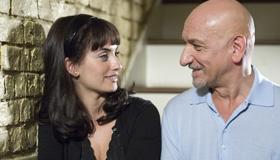 An elegant meditation on lust and mortality by Spanish director Isabel Coixet, who coaxes hypnotic performances from Ben Kingsley and Penelope Cruz as the age-gap romancers. Should appeal to mature audiences, but that will necessarily limit its box office spread. Despite the presence of Cruz’s star power, don’t expect much crossover business.

Philip Roth’s 2001 short story “The Dying Animal” is a clinical study of sexual obsession. Roth’s frequent protagonist David Kepesh, a professor of English (played in this silver-screen version by Kingsley), endures a fraught romance with his ravishing Cuban-born student Consuela (Cruz), some 40 years his junior.
Kepesh, in his seventies, generally describes his own failings as a burden he shares with all men, and he has a realistic appraisal of his own self-worth. He is hopelessly immature in his emotions and completely out of touch with his feelings. As far as he is concerned, love is doomed because, to men, sex is all that matters, and—as if to prove it—he has made a habit of sleeping with his students because any real commitment scares him. He finds some male support—albeit of the skeptical variety—in the shape of his friend George, a sage-like poet played by Dennis Hopper. Indeed, George gives him some wise counsel: “Stop worrying about growing old, and think about growing up.”

This film adaptation, scripted by Nicholas Meyer (who also turned his attention to Roth’s The Human Stain ) and directed by Coixet ( The Secret Life of Words ), wisely takes a more feminist tack, which helps to dissipate the flavor of Roth’s misogynistic original.

The Kingsley character, who provides a self-deprecating voiceover, is convinced that Consuela, no mere sex object, will leave him. He finds it better to fantasize about being left than to accept the challenge of being worthy of her affection. His preoccupations with eroticism seem more like an adolescent discovering sex for the first time rather than a mature man of rapidly advancing years. Boys, it seems, will always be boys. There’s a neat twist in the tail, however, when Consuela returns to reveal a few home truths and dishes out her own lesson in jealousy.

Despite the age gap, the relationship comes across as completely convincing, partly due to the astute playing of Kingsley and Cruz and the intimacy and chemistry of their frank and intimate love scenes.
Besides the principals, there are several eye-catching performances from some well chosen actors. The cinematography by Jean-Claude Larrieu is crisp and clean.

Coixet has explained her fascination with the topic thusly: “I think the only way to survive in this world is to try to understand men because we are surrounded by them. It’s not really that I want to understand them, but there is no choice. For me, they are much more predictable than women, who are much more mysterious.”
Elegy represents that rare hybrid in modern cinema: an elegant and seductive un-Hollywood romance pitched perfectly for our times and preoccupations.