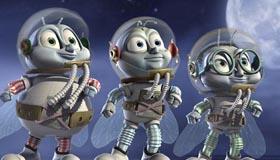 Touting itself as the first animated feature ever created for 3D, Fly Me to the Moon delivers not only on that front but also as fine family entertainment with a particularly strong message for the small fry. Focusing on three houseflies in 1969 who decide to stowaway on the historic Apollo 11 mission to the moon, this delightful toon manages to both inform and inspire its young target audience. With two similarly space-themed animation flicks ( Wall-E and Space Chimps ) still in theatres, parents may feel it’s a case of been-there/seen-that-already, but still ought to give it a whirl. The number of theatres able to project the digital Real D process will limit box office, but word of mouth should be good and ancillary business should be over the moon.

Right from the first few frames, when one of the star flies buzzes off the screen and out into the audience, the filmmakers show they are especially adept at pulling off some tricky animated 3D effects. It’s an impressive use of the advancing technology. But gimmicks will only get you so far. Fortunately for Fly Me to the Moon, although it is aimed at the youngest of moviegoers, the film has a story worth telling.

After being inspired by his Grandpa’s (Christopher Lloyd) stories of helping Amelia Earhart in her historic flight across the Atlantic, Young Nat (Trevor Gagnon) enlists two of his flyboy friends, IQ ( Philip Daniel Bolden) and Scooter (David Gore), to join in fulfilling his dream of joining the first astronauts in their walk on the moon. Sneaking aboard Apollo 11, the three are quickly spotted and placed in a test tube for later study. When there’s an electrical malfunction, they escape and end up actually enabling the jeopardized mission to go forward and reach the moon. Trouble rears its head though on the way back when Grandpa gets word on Earth from his old friend Nadia (Nicolette Sheridan) that there is a Russian plan (led by Tim Curry’s fly spy, Yegor) to sabotage the flight and cause a great tragedy. Will our flyboys save the day? What do you think?

Director Ben Stassen has had a lot of experience with 3D projects and large-format films, which has clearly prepared him well for the challenge of pulling off a full-length, animated 3D feature. Distributor Summit Entertainment says they will release only in theatres equipped for the technology, even though that number has not yet risen much above 800. It’s a wise move, since the real joy of the film is in the unique feeling that we are right up there on the moon with these flies and guys. In fact, a cameo from one of the real-life Apollo 11 astronauts, the appropriately named ‘Buzz’ Aldrin, only adds to the authenticity, even though he is used basically to point out that in reality flies never could have made it on board the spacecraft.