God and Gays: Bridging the Gap 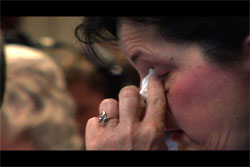 The documentary God and Gays: Bridging the Gap insubstantially explores one major issue: Why an individual or group might seek the recognition or acceptance of organizations (mainly, but not only, Christian faiths) that not only do not want them, or by doctrine/creed specifically reject them. This issue alone would make a great documentary, but this is not that film. Hating on a film for not being the one you’d prefer to see generally reflects a shallow, if not biased analysis at best. Nevertheless here we are—hating for that reason and a few others. The gay community, particularly the spiritually-inclined gay community, may find God and Gays relevant and empowering. Given the community’s penchant for internecine support, the box office prospects here may be better than they might otherwise seem at first blush. Still, it’s the wrong movie.

That said, questions floated herein include such things as “Is being gay a choice?” “What is the ‘gay agenda’?” “What does the Bible say about homosexuality?” and “Is it possible to be gay and religious?” The latter comes close to considering the question posed in the first paragraph of this shallow analysis, but never really manifests in the film proper. Instead, what we have here are a number of gay folks and those who support their positions for the most part whining about how the “other Christians” and their leaders have treated them so badly, denied them their right to worship what is apparently the same God and otherwise misrepresented what that God, the Bible and someone named Jesus, has said and/or written about homosexuality—which, of course, is all ridiculous.

It is not ridiculous that these disparate positions, ideas, interpretations and beliefs exist. They do exist, as anyone living anywhere in the United States has been well aware of since the maturation of the gay rights movement some 40-odd years ago. What is ridiculous is the idea that what a given individual or group says about another’s faith should be relevant to the latter (occasionally gay) individual.

God and Gays: Bridging the Gap begins with this notion and never questions it. It never poses the more straightforward question to any of its many subjects—including several theologians of various orientations, actors, couples, writers and others—why are they bothering with any of this? It never ponders the more interesting, if much simpler notion that if there is a God, wouldn’t that God love and accept us no matter what these people or these religious texts indicate? And, conversely, if there is no God, if the heralded texts that say the things they say (with or without interpretation) are nothing more than the extended fictions of the human psyche, then what do they and their interpreters matter? Either there is a God who loves us, or not. It’s a better question for a documentary about God and gays, but apparently a question for a different documentary.