close
This Ride falls short of being trash-tastic 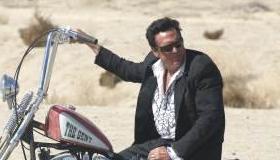 Written and directed by Larry Bishop, this genre flick is fairly faithful and mildly fun. Boobs and blood sounds like a no-brainer drive-in classic, but for every Faster Pussycat, Kill, Kill and Wizard of Gore that merits a Criterion release, there’s a thousand more trash pictures that never make it out of New Jersey. This might find late-night audiences across the country, but won’t squeeze into the trash-tastic canon.

Cross the Six Six Six biker gang—the “Sixers” or “Son-of-a-Bitches” to their frenemies—and you die in one of two ways: an arrow through the chest or a knife to the jugular topped off by gasoline and a match. They used the latter on an Arizonan beauty and acid dealer named Cherokee Kisum (Julia Jones) back on July 4th of the bicentennial and the fireworks are still blazing. Pistolero (Bishop), President of the Victors gang, has since chased the Sixers into hiding but can’t get the neighborhood bombshell’s murder, her missing son and her hidden fortune off his conscience. And when old-timer St. Louie (Pete Randall) gets sliced and torched in the usual fashion, Pistolero knows he and the Sixers, now headed by Billy Wings (Vinnie Jones) are headed for a brutal slaughterfest—but first he’s got to enjoy this coked-up orgy.

The main problem is Bishop’s adamancy on playing the lead tough guy when he’s got the face of a shoe salesman. His efforts to bronze and goatee himself succeed only in turning him into an Oompa-Loompa. For dramatic intensity, sometimes in a dark bar, he tilts his head toward the sole window, imbuing his startlingly blue-green eyes with the beatific glow of Tiffani Amber Thiessen. Better is Eric Balfour as his slender, tattooed prodigy Comanche; best is Michael Madsen’s The Gent, a world-weary Rat Pack biker who roams the road in a ruffled tuxedo shirt and laughs with the lust and joy and violence that should be crammed into this flick’s every minute. In a brilliant stroke of stunt casting, Dennis Hopper motors through as veteran Victor Eddie Zero and actually bothers to stick around a while and not just disappear with his paycheck once he’s sped down the highway on a vintage motorcycle and made it clear that these young folk are pussy willows.

The plot’s too muddled to kick back and enjoy; it’s all double-crosses and preemptive strikes, confusion aggravated by Bishop’s tendency to mistake suspense for withholding key information that would make us understand just who and what is going down. Quentin Tarantino signed on as one of 11 producers, but it’s unclear what he contributed besides a lick of Dick Dale opening the soundtrack. Scott Kevan’s cinematography gets an A for effort—the sky is vast, the sand bleached, baked and clotted with inky black bikes and leather. But what we really want is an S for Sleaze and if ever a topless oil-wrestling match felt perfunctory, the one here does. All the women are whores; worse, they’re boring. Leonor Varela as Pistolero’s self-considered main squeeze is a bad actress who looks great in white jeans. The pair’s scenes are trying too hard for titillation, except for one so-bad-it’s-brilliant battle of bad puns when her announcement that her “bush is burning” plumbs pyro metaphors from fire-resistant, fire-retardant and fire-proof to FDR’s fireside chats. A peyote dream sequence where a nude Cherokee dances for Pistolero is notable for its anachronistic insistence that women shaved landing strips in 1976.