close
Audiences will have a hard time believing in Poole 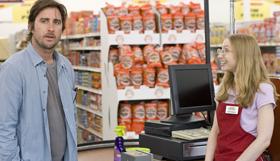 Faith is the subject of Henry Poole Is Here —indeed, this is a film that wants its protagonist (and by extension, its audience) to believe in God. And by God, we mean the Christian God, preferably the Catholic one. Divine intervention notwithstanding, the box office here would ordinarily be meek, but in trying times movies about “something to believe in” tend do better than the ordinary bleak-and-hopeless fare that typically drives domestic box office. And these are trying times, indeed, so ring one up for Jesus.

The film begins with Henry Poole purchasing a house he does not really want, and pointedly telling Meg (Cheryl Hines), the nosy real estate agent, not to bother fixing the water stain that looks like Jesus on a wall in the backyard. “It doesn’t matter,” the laconic Poole (as played by the equally laconic Luke Wilson) says, dutifully executing the chronically plotted dialogue, “I won’t be here long.”

Um  what could he possibly mean by that?

The next thing he knows, his pushy next-door neighbor Esperanza (Adriana Barraza, Babel, Amores Perros ) is lighting candles and praying to the Jesus water stain. Then comes Father Salazar (George Lopez, Swing Vote ), a reasonable guy who makes no declarations about the authenticity of the Jesus wall, but you can tell he wants Henry (which is to say you) to believe, because what’s the point of being a priest if you don’t believe in Jesus walls, or Jesus potatoes, or Jesus croissants, or whatever.

Then come the miracles. With a touch of the wall, the extremely near-sighted remove their glasses to find the have 20/20 vision, and children who aren’t actually mute, but don’t talk much, suddenly speak. Still, Henry will not believe, so God drops a house on him. But he doesn’t kill him with the terminal disease he doesn’t really have. Just in case you didn’t figure it out on you own.

He also gets the girl (Radha Mitchell) literally next door, whose insanely obvious name is Dawn.