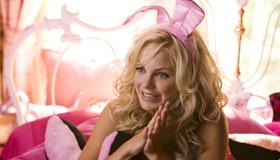 If Legally Blonde screenwriters Karen McCullah Kutz and Kirsten Smith have penned another sly send up of female roles, director Fred Wolf is too distracted by easy excuses for T&A shots of star Anna Faris’ ruffled panties wafting in the breeze to notice. The combo of leers and heavily-watered down femmepowerment should irritate audiences of both genders, though if there’s any justice in the world, this won’t be Faris’ last shot at center stage.

Faris plays Shelley Darlingson, a once-homely orphan who blossomed into a high school swan and then one of Hugh Hefner’s princesses. Shelley loves the endless shopping sprees and mangotinis. More, she loves having a big family, even if most of the tree is made of competitive girls and horny men. She’s cameo-ed in pictorials like Girls of the Midwest, Girls of GEDs and Girls of Charlie Sheen and is certain Hef’s about to proclaim her Miss November. But the morning after her 27th birthday (59 in Bunny Years), she’s evicted from paradise and forced to find a new place like home in a skimpy version of Dorothy’s gingham and pigtails.

That this is the real biography of most pinups should have a comic bite, except there’s no venom. Playboy prefers younger girls—that’s a fact, and it’s fine, so do gymnastics coaches. In this version, however, Shelley’s secretly been ousted by a rival (Monet Mazur) and an abandoned Hefner mopes in his bedroom drowning his sorrows in Haagen Dazs. Also timid is a gag about Shelley’s response to a cop who pulls her over when we learn she’s used to unzipping pants and performing.

Where Kutz and Smith are more comfortable heading is another fish-out-of-water comedy where a blonde in candy pinks discovers academia. Here, Shelley stumbles into being the house mother of the loser sorority on campus, which is about to lose its charter thanks to both the members’ geek status and a scheming rival sorority. The dorks of the Zeta house all look like they’re auditioning for Velma in Scooby Doo. Save for a hunchback farm girl with a look only Dorothea Lange would love, there’s a weaker attempt than in most makeover comedies to hide the gals’ inner and outer beauty—they’ve got legs and smiles for days. Emma Stone, Superbad ’s main crush, is the Zeta’s awkward leader; Rumor Willis and American Idol ’s Katherine McPhee saunter through wearing their respective back braces and pregnant bellies. Most have interchangeable personalities except for the lovely Kat Dennings, who resembles a young, punk Winona Ryder studded with facial piercings.

Dennings’ Mona is the only coed to blast Faris on sight for being “an archaically superficial representation of the male fantasy.” (The rest hope she’ll be able to teach them to pick up dudes.) The comedy lumbers towards a middle act in which the newly-hot chicks become the mean girls they’ve always loathed and Faris realizes that her mansion seduction skills don’t work on her brainy beau Oliver (Colin Hanks). A date where she’s mortified that her three surefire moves all fail—talking about her ass, talking about her other suitors and exclaiming “Your biceps are so huge! Kiss me!” is one of the only scenes where Wolf’s USA Up All Night tone doesn’t trumpet tits over thoughts. (By the credits, the flick’s merely neutral.)

But Faris is so sincere and good-hearted that she never cheapens herself with the bimbette role as she widens her Bambi eyes and squeals in her breathy voice that dips into a Sepultura imitation whenever she repeats the name of a person she’s just met. Her startling demon grunt gets laughs every time (no small feat, as they use it a lot) and reminds fans of her strengths as a go-for-broke screwball talent. The criminal waste of Faris’ comedic gifts should have half of Hollywood locked up. (Oddly, only Ang Lee’s Brokeback Mountain has given her a chance to shine.) Like her character, she deserves respect.