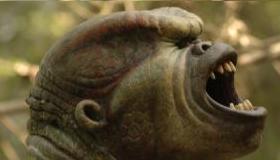 An old-school horror movie with nary a digital effect, Jack Brooks: Monster Slayer is about exactly what its title implies—a dude named Jack, who slays monsters. And by monsters, we mean other dudes in monster suits, most of which are pretty cool when they’re lit well, which they often are. Nevertheless, in world where horror-porn is deemed the hot commodity for the teen crowd, Jack Brooks: Monster Slayer is actually just like your dad’s horror movie, and dad’s got cable and a TIVO.

Our story begins with young Jack on a camping trip with his parents and little sister at which everyone (except Jack, obviously) is eaten by a monster. Fast-forward several years: Jack (Trevor Matthews) is an angry young man with an explosive personality and a shrink who’s afraid of him. There is, in fact, a narrative that propels the story and character along in JBMS, but it’s for the most part, ridiculous. It does, however, involve the great Robert Englund (aka Freddy Krueger of Nightmare on Elm Street ), as a night school instructor who becomes possessed by a black demon heart that turns him into a giant, greenish turd-like creature that sucks people’s faces, and turns them into people-eating zombies. The story that gets us to all this stuff actually makes no sense, and certainly can’t possibly matter. What is cool are the totally practical special effects, which includes a lot of latex, monster applications, blood, guts and people screaming as they’re eaten alive; and that one huge Englund face-eating turd-monster, that is a combination of Jabba the Hutt and a  well, turd.