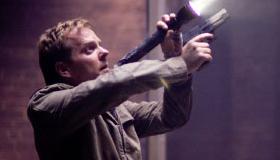 Narcissists beware: Looks can kill. In Alexandre Aja’s thriller remake of the Korean flick Into the Mirror, those simple sheets of glass and silver are murderers. Or conduits to murder. Or something. Moderate opening traffic will have a few dozen kids afraid of their reflections before the nation forgets the film ever existed.

Writers Aja and Gregory Levasseur can’t define exactly what their flat shiny villains can do—like Barbie, seemingly everything. They bloom uncleanable hand prints, reflect ghosts, absorb bullets, engrave messages, flicker like computer screens, distort faces and convince people they’re on fire. Then, beyond all 2D sense, these inert pieces of furniture graduate to screaming, bulging, possessing children, mimicking loved ones, driving victims to suicide and slicing people’s throats by showing them images of the pain. In one nonsense homicide, a bathing woman’s jaw is handlessly ripped off merely because a mirror was in the room. Aja proves a horror truism: The more, the unscarier. With every cruelty unique, the fear is muddled—a single strand makes the best noose. One madman, one shark, one simple premise like “Don’t Fall Asleep.”

As Ben, a former NYPD detective of ill repute, Kiefer Sutherland rasps and panics as a newly hired security guard for the old Mayflower department store, a grand, Grecian-columned behemoth charred like a marshmallow after a deadly fire 28 years ago that torched 28. Ben’s an ex-boozer and current pill popper sleeping on his sister’s (Amy Smart) couch. In the last year, he accidentally killed a man and estranged his wife Paula Patton and kids Cameron Boyce and Erica Gluck. He’s desperate, but darned if I’d believe he’s so hard up he’d stick around the spooky, electricity-less joint that can’t be torn down or cleaned up due to what boss John Shrapnel sniffs is an insurance fight.

Mirrors aside, the Mayflower is a terrific spot for a haunting. The department store appears to stock nothing as mundane as blenders. Mannequins line the rooms—some still dressed for the beach or a ball—and, of course, it’s infested with Shock Pigeons. But there’s something lurking in the mirrors that’s made past guards off themselves and their families and a snowballing series of secrets about schizophrenic child and a mental hospital stack up to nonsense. The dialogue is piffle, and the plot never makes sense—why, for example, is Ben haunted on Day One when his boss hasn’t seen anything for 15 years? Aja’s best stroke is making us aware of how impossible it is to avoid our image. Everything from metal to doorknobs to TV screens is suspect. At one climax, Sutherland barks “Be careful of the water! It reflects!”

Less clear is exactly why the mirror thing wants to off his loved ones when Sutherland’s trying to do its bidding by tracking down a mysterious “Esseker,” and how exactly the mirrors communicate with the hive mirror that might be The Devil Himself. (I say “might” because I sat through the whole things and I still can’t tell.) Perhaps these black magic mirrors have telepathy? Perhaps they’re controlled by Snow White’s evil queen? Or perhaps they’re windows to the dead or whatever  glaring at us from within a chrome toaster? Next time you’re heating a Pop Tart, watch your back.