close
Man represents a prime example of cinema in the raw 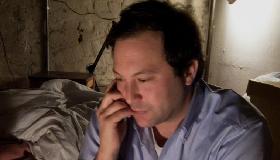 Momma’s Man is the story of an adult man with a wife and child who refuses to leave his parents’ home after what was supposed to be a short business trip. Writer/director Azazel Jacobs taps his own parents (avante-gard filmmaker Ken Jacobs and Flo Jacobs) to play versions of themselves and stages the film in their Tribeca loft, which is where the filmmaker himself grew up. This, along with the casting of sometimes surrogate Matt Boren (who also appears in Jacob’s 2003 film, Nobody Needs to Know ) as Mikey, the son who will not leave, suggests that there is something at least emotionally autobiographical about Momma’s Man. The film, which is nearly bereft of artifice, might be called cinema in the raw. This is not big box office moviemaking, but it’s filmmaking at nearly its best.

The phenomena Jacobs is reflecting upon in Momma’s Man is something akin to a midlife crisis, only it happens much earlier, and is, from a strictly psychological standpoint, tied into an oedipal complex, all of which is at play in the movie. We think  but maybe not. In any case, it’s a piercing film that may or may not represent some real-world malady, but certainly represents the very real desire we’ve all felt to just go home. To have our parents, if we were lucky enough to have some sort of decent parental figures, make it all go away as it once seemed that they could.

As Mikey engages in his regression, he attempts to literally reconstruct the milieu of his high school years. He reaches out to old acquaintances, some moved on and others in a permanent state of regression of their own, including Dante (Piero Arcilesi), who—but for a few stints in jail—has always lived with his mother. Meanwhile, in Los Angeles, Mikey’s wife (Dana Varon) works through the various steps of acceptance, one of which involves a stable and caring next-door neighbor. If there is a single contrivance in the film, this storyline would be it. Indeed, one wonders why Jacobs includes the “actual” presence of the abandoned family in the film after all. While it’s a given that the wife and child are plainly affected by such a circumstance as this, the central conceit of Momma’s Man (which begins with it’s title), is that the film is about Mikey’s ambivalence on an existential level rather than the ordinary and obvious concerns of all families that have been abandoned. Of course this is difficult for the wife and child; of course he’s guilty. That said, it’s a lovely movie.