close
Audiences won't get high off of Express 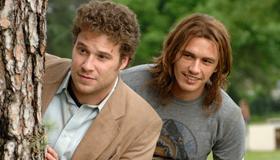 Judd Apatow, Evan Goldberg and Seth Rogen’s latest is a dopey dope comedy that leaves audiences wondering when they were supposed to laugh. The flick’s pedigree will pack the theatres with people hoping for this summer’s Superbad, but box office receipts should fall off sharply once word gets out that the product is bunk.

Rogen buys weed from James Franco, a child-hearted dealer with the brain of a gumball; he’s so smoked-out he probably opens the fridge and forgets why, standing there dazed until the frostbite burns his knees. Franco’s considered too pretty for comedy, but he’s got an advantage over Rogen, who labors as the straight man. Rogen is a comic built for a tie. He seems to crave John Belushi’s beer hat, but there’s a whiff of temp worker about him. Like Will Ferrell across the multiplex in the superior Step Brothers, he’s bested by his supporting cast. Franco’s got a contagious smile and a habit of anthropomorphizing his greenage. He makes life seem easy. That’s the charm of stoner movies, even if you have to stomach a severed toe or leering monstrosity like Jim Breuer.

But then writers Rogen, Goldberg and Apatow (who gets a “story by” credit here) go about getting the whole damned genre wrong. “What a cute little cop!” smiles Rogen when he sees Rosie Perez storm into the house of Gary Cole, the man he’s rousing himself to subpoena—riiiight after this joint. Seconds later, Rogen’s stoner loser witnesses the pair murder a rival drug impresario, and he’s off and running—except he’s left behind a telltale butt from his primo Pineapple Express, and Cole knows there’s only a few men in town peddling that weed varietal. The first half of the flick has a lazy appeal as Franco and Rogen make half-baked attempts to evade Cole’s hired assassins. The duo toke up, start to make a plan, then either get too paranoid and wild or too chill to bother. You aren’t laughing much, but it’s bearable. To save their necks, the boys make bumbling steps toward action hero-dom. It’s all well and good when they’re shaking down Franco’s supplier Danny McBride for colluding with the enemy—the brawl is an idiot-fest. McBride throttles Rogen, Franco smashes furniture, then—in the climax—Rogen punches desperately at McBride’s keister. When the dust settles, the dudes have McBride anarchically duct taped to a chair and imperiled by a four-inch cactus.

This is savagery we can cheer. But anyone wiser than a 10-year-old bully knows Rogen would never hold a gun ... with real bullets ... then point it at a human ... and shoot to kill. He’s not Rambo. Except in a misguided impulse towards “comic” excess, director David Gordon Green has him do just that, then take it further—with Rogen and Franco strapping on machine guns and mowing down a warehouse of baddies who don’t just fall off balconies in cartoonish deaths, their fatal moment of impact avoided. These casualties bleed, and Rogen stomps across their blood. The clowns are deadly; the audience squirms. What a buzzkill!