close
Red is a flawed throwback to 70's revenge films 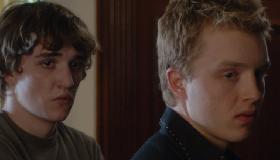 The story of a widower forced to take escalating measures to avenge the murder of his beloved dog, Red is a very American tale that turns on simple concepts of right and wrong, honor and (most American of all) psychological scarring. And it’s easy to see how a stateside director would have succumbed to the movie’s dime-novel flavorings and served up stale beats from ’70s revenge flicks like Walking Tall. But Norwegian director Trygve Allister Diesen’s approach is much more patient and rewarding. Though the film features a steely, powerful performance by Brian Cox—one that recalls the later years of laconic Western icons like John Wayne and Gary Cooper— Red is not without its problems. But it’s a well constructed slow-boil where yesterday’s secrets drive today’s behavior. In a crowded summer marketplace, Red goes beyond counter programming into the realm of suicide run. Older audiences should look for it on cable and DVD.

Avery Ludlow (Cox) is a lonely widower and general store proprietor living in a small, dusty, modern-day Oregon town. His most trusted companion is Red, the dog given to him as a 50th birthday gift by his late wife. While Avery and Red are enjoying a relaxing afternoon fishing, the pair is approached by three teenagers, led by rifle-toting punk Danny McCormack (Noel Fisher). Diesen, a former USC film student making his English-language debut, knows if this scene doesn’t work, nothing henceforth will. So he wrings out the escalating tension, helped enormously by Cox, who demonstrates here (and everywhere else in the film) that acting is behavior, not dialogue. The encounter vibrates with quiet edge, ending with Danny killing Red for no other reason than he’s a cold-blooded, teenage jerk caught up in the moment.

Using a spent shotgun casing, Avery tracks Danny down to the home of his father, Michael McCormack (Tom Sizemore), “a one-generation-removed redneck” who now relaxes in the study of his mansion (two locations not usually associated with rednecks) after making a fortune in his father’s trucking business. In front of Michael and Avery, the weasely Danny professes innocence, even though Avery knows it’s a lie and— probably—Michael knows it, too.

There are so many opportunities for the movie to run off the rails, but it avoids all of them. Almost. With the McCormacks circling the wagons around Danny and Michael unleashing his political clout to keep Avery at bay, the widower is approached by crusading local TV reporter Carrie (Kim Dickens, barely carrying her weight). Carrie, who “wants to make a difference,” thinks the best way to get Danny to admit wrong and apologize is to put the story on television, which she does. Although she’s a phony concoction and their platonic relationship is just as phony, Carrie serves her purpose, getting Avery to admit the family tragedy that’s increasingly driving his actions. It’s the movie’s second key scene, and Diesen (who took over for original director Lucky McGee) plays it as such, with Cox performing the heartrending soliloquy in mostly one take. We understand why the dog is so important to Avery, and why his initial inclination is to help a troubled youngster avoid a troubled adulthood.

It’s a shameful truth that in movies like these, we’re anticipating the moment when Avery gets medieval on Danny. And eventually, we get our wish, but the satisfaction isn’t totally primal. (This isn’t Death Wish, after all.) Yet Danny is a hothead who makes mistakes, so when Avery bates him into a bat-wielding attack, then gets in a couple good punches, it’s cathartic. But only because Avery is getting closer to the only thing he wants, which is Danny’s apology. Because buried under the “yes, ma’am,” “thank you, ma’am” talk is Avery’s hope that any mea culpa would serve as proof that responsibility and honesty are not forgotten pastimes. That’s why it’s a bit of a letdown when the whole affair culminates in a blaze of gunfire. It means Avery got more revenge than any affirmation of his moral code. But as Diesen fades out with a pat, artificially full-circle ending, we still appreciate how Red danced on the edge of the Movie-of-the-Week abyss and, thanks to Cox and the careful tending of Jack Ketchum’s original novel, never fell in.