close
When it comes to the Sisterhood of the Traveling Pants, our reviewer will stick to dresses

The Sisterhood of the Traveling Pants 2 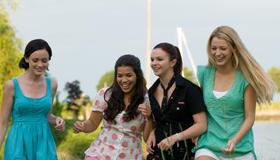 This sequel to the hit 2005 tweenpowerment flick lives up to little in the title. There’s scant sisterhood or pants, but these chicas do travel. Audiences might not be quite as mobile in getting to the theatre, but the girls should make a few new friends and keep some of their old ones before entering the slumber-party rotation on DVD.

As in the first one, Tibby (Amber Tamblyn), Lena (Alexis Bledel), Carmen (America Ferrera) and Bridget (Blake Lively) are splitting up for the summer. Unlike its predecessor, this installment is not adapting one of Ann Brashares’ novels, but cramming the latter three all together and aging up the teens to barely-legal college freshmen. Since 2005, Ferrera ( Ugly Betty ) and Lively ( Gossip Girl ) have ascended as TV stars; conversely, the film’s production has dropped a size from veteran comedy director Ken Kwapis to first timer Sanaa Hamri, who struggles to rein in Elizabeth Chandler’s disjointed script. The flick starts with the foursome saying their farewells for the vacation duration. Daring Bridget is excavating skulls in Turkey, effervescent Carmen is going to acting camp with her competitive Barbie-doll frenemy Julia (Rachel Nichols), shy Lena is studying charcoal sketching and glum punk Tibby is stuck at her video store hating on life.

Dear motherless Bridget lost her virginity to an—gasp—older man in the first film, and so is here sent to the mommy-issues purgatory where she hunts for meaning in old bones and old photographs belonging to her estranged southern grandma Blythe Danner in a fine, understated turn. Tibby, Carmen and Lena are accorded love lives with, respectively, a puckish punker (Leonardo Nam), a Brit thespian (Tom Wisdom) and, for Lena, the two-fer of a hunky biracial art model (Jesse Williams) and Greek ex Kostas (Michael Rady), who is rumored to be married. Except for a subplot where the condom breaks during Tibby’s first time and she responds by doing nothing except panicking at the sight of babies (c’mon gang, would the mention of Plan B incense Tulsa?), the romances are harmless, sexless Ken-doll crushes notable only for their refreshing colorblind pairings, made all the more vital by going unmentioned.

That’s all fine you say, but what about The Pants ? Narratively, they’re a frayed thread. They pop up in the mail, and—rarer still—are occasionally seen on the girls themselves, who seem to favor floaty prairie skirts. They’re not holding the plot together; neither is the girls’ friendship, which seems to vanish up until a climax where they argue about why no one seems to care. The books have been accused of creating a fraudulent posse of girls who would never be friends, and here they hardly are at all. Instead, the flick feels like four after-school specials that could have been tied together as well by commercials. A closing sequence in Santorini unites them in a hunt for the pants, lost in the Mediterranean winds, but devolves into three-against-one as Lena is bullied into following her dreams: i.e., making it with a Greek fishermen. With friends like that, I’ll stick to dresses.