Spirit of the Marathon 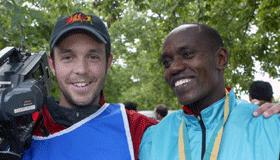 There are two types of marathoners: those for whom the goal is competition and those for whom it is completion. The elite athletes who make up the former category often have compelling personal stories, but in his first full-length feature, documentarian Jon Dunham wisely decides to concentrate more often on the other people running for other reasons who make up the latter. Their reasons for running—personal rather than professional—are more universally relatable, so much so that Spirit of the Marathon managed to gross $1 million domestically when screened once each on two Thursday nights in early 2008. Like the majority of its subjects, this inspiring doc may not be able to hang with the big girls and boys at the front of the box office pack, but it looks to have the legs to last in the right theatres—perhaps especially so during the Olympics.

Indeed, it was at the 2004 Summer Olympics in Athens that one of the two elite athletes that Dunham does follow here, Deena Kastor, captured a bronze in the marathon—just the second marathon medal won by an American woman. (Kastor is also a member of Team USA at this summer’s games.) Although one of the top runners in the world, the eloquent Kastor had never actually won a major race at the storied distance of 26.2 miles at the time Spirit of the Marathon was shot—a surprising situation that she intended to address at the 2005 Chicago Marathon.

No less determined to cross the finish line, however, were a couple of female first-timers and two male repeat runners. Particularly touching are the tales of single mother Leah Caille, who started running in the aftermath of her divorce, and of septuagenarian retiree Jerry Meyers, who was training to complete his fifth Chicago Marathon—the first with his adult daughter Rona running at his side. On race day, these charming amateurs might have been towards the back of the pack, but their desire to triumph over adversity and prove that there is still possibility left in their lives—even after the end of a marriage or a career—take the lead in Spirit of the Marathon.