close
The force is not with Clone Wars 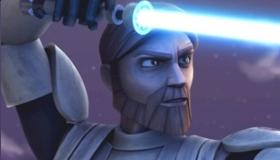 Eschewing the now iconic scrolling prologue for a more kid-literate narration, Star Wars: The Clone Wars targets a younger, less critical audience than that aimed for by the live-action portion of the franchise. The film’s plot is an oft-dull trifle revolving around a mission to return the kidnapped son of Jabba the Hutt, Rotta the Hutlet. Anakin (voiced by Matt Lanter) and his new paduan Ahsoka (Ashley Eckstein) offer younger audiences characters to identify with (up to a certain point), but the film doesn’t aspire to be more than a kick start to the Clone Wars TV series: a cartoon that will rack up dollars and keep the franchise alive—if in an irksome state of suspended animation—for some time to come. Even forgiving the film’s apparent deficiencies, it’s a product of the Star Wars universe and as such will undoubtedly yield well for the Lucas Empire.

When Luke Skywalker referred to “The Clone Wars” in Episode IV (aka the original Star Wars ), he made it seem like a space in time both definitive and lost to history. It’s with good reason Lucas and his henchmen chose to build a series from this period. Additionally, a near limitless number of stories can be mined from a period that has inspired extensive speculation from fans. Sad then that writers Henry Gilroy, Steven Melching and Scott Murphy chose to start the series with a film about an altogether unimportant battle in the otherwise epic war.

Anakin, now given a student by Yoda, has risen in rank to Master. At first, Anakin is unwelcoming to his precocious and strong-minded student Ahsoka, but as he sees his learner mirror him in playful recklessness, their battles bond them and a partnership develops. The crux of the story revolves around an Empire plot to kidnap and destroy Rotta the Hutlet and to pin the blame for the crime on the Jedi, thus securing the Empire trade routes in the outer territories in the process. Predictable and groan-inducing humor comes from Jabba baby-talking to his kid. This is pure Saturday-Morning-quality work. With one strange exception: plotting goes surprisingly far into the tactical maneuvering employed by the Jedi. (Perhaps this is an aspect of the mythos the film’s fans like to discuss?) Whether the inclusion of such strategy forecasts a returning trend in the story (as would be seen in the TV series) is hard to say, but it might be a way to rope in the parents of the show’s intended audience.

The animation is very hard to overcome. Even if one doesn’t go in expecting Pixar production values, it’s hard to see past the mechanical quality of the characters’ movements—which, by the way, makes the robots in the film look great. Wow, those were naturalistic battle droids! With all the action sequences in the story meant to absorb us (most of which are actually rather dull, and I’m a huge sucker for hand-to-hand combat), it was near impossible not to get kicked out of the experience by Ahsoka’s knobby motions.

The character of Ahsoka is sprightly and girlish, and as such, looks like a Ms. Pacman-style marketing stab to attract the franchise’s commonly overlooked female audience. But here, girls aren’t as well served as one might hope—even though Padme shows up (voiced by Catherine Taber, doing a rather good Natalie Portman impersonation) and helps save the day. Femininity plays a very strange role. With a mission to care for and return a baby, Ahsoka does a bit of mothering—this, of course, happens conveniently between battles—and furthers an even stranger trend within the Star Wars universe, otherwise defunct of comfortable mother figures. Funny then one of the film’s reining baddies is a wildly effete, purple-painted Hutt. Jabba’s uncle (said purple Hutt) dwells in the lower level of a cantina, speaks English (a sign of his villainous cosmopolitanism?), is dolled up like a New Orleans pimp circa 1940 and smokes a hooka like a low-rent Cheshire cat. He’s a dubious character who’s made all the more dubious because he skirts gender roles. (How retro!) And yes, they did manage to impose epicene gender on a giant grub. I’m not sure if that warrants applause. Maybe?

Regardless of its limitations and lower-grade production values, Star Wars fans will still line up to see this film (the audience I saw it with featured many well costumed attendees) but the film is more oriented to indoctrinate their children than it is to continue the story for the generation who “discovered” it in the first place.