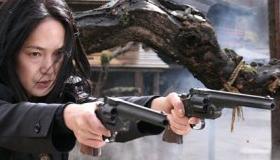 Judging by his riff on Sergio Corbucci’s seminal spaghetti western Django, auteur Takashi Miike does not suffer from the anxiety of influence. At the risk of stretching pasta metaphors to the breaking point, Miike has invented a new subgenre with this delectable hybrid partly named after the starch-less Japanese dish sukiyaki: the rice noodle western. When blood-splattered macaroni meets cold samurai steel, both hold up surprisingly well. The English-language stew goes down easily, with enough flavor to tickle the taste buds of adrenaline-seekers and enough heft to sate connoisseurs.

Sukiyaki Western Django is comfort food garnished with aural and ocular delights. It’s often quite moving, as well; though not the most nutritious repast, few will describe it as forgettable. Miike transposes foundational Japanese tales concerning the 12th-century Genpei clan wars into a cowboy milieu, thereby fusing two filmic traditions that have always benefited from cross-fertilization. Trying to identify every antecedent and allusion here would spoil a great deal of the fun. A dollop of Shakespeare and a dab of McCabe and Mrs. Miller are among the seasonings enhancing basic ingredients from samurai and western cupboards. Perhaps the undecided can be persuaded to partake if made aware of the movie’s visceral violence and invigorating humor, plus its sensual energy that melds post-punk androgyny and chop-socky action.

After a kabuki-influenced prologue featuring a pistol-wielding Quentin Tarantino, the plot unfolds in a Nevada mountain town where rival gangs—the red Heike family led by Kiyomori (Koichi Sato) and the white Genji family led by Yoshitsune (Yusuke Iseya)—are in the midst of a protracted standoff, each hoping to get their paws on a fabled treasure. A laconic gunslinger (Hideaki Ito) rides into town wearing a brown duster and offers his services to the highest bidder. A gruff local woman (Kaori Momoi) takes him under her wing, and he’s drawn to the plight of her daughter and grandson, who were driven to prostitution and muteness, respectively, by the two gangs’ brutality. The mayhem is ratcheted up when one side unveils a Gatling gun and coffin, key fixtures in Corbucci’s Django. During the climactic showdown, the stranger’s six-shooter, having bested a bowgun, TNT and other weaponry, clashes with a samurai blade.

Striking a balance between homage and parody, Miike and his crew achieve a range of effects with impressive alacrity and economy. Cinematographer Toyomichi Kurita and production designer Takashi Sasaki expertly deploy different hues and textures, and the crisp sound design and dolorous score likewise feel eclectic without betraying the disunity of a pastiche. The violence is responsible for its share of arresting images and is neither extreme nor gratuitous given the forms Miike is blending and when compared to some of his earlier films. It’s a major source of humor, second only to the line readings of countless western clichés—“a dollar short and a day late,” “a man’s gotta do what a man’s gotta do” are two examples. (Miike says one virtue of English dialogue was that his actors were too busy working on their pronunciation to pester him with questions.) Tongues may be gently in cheeks off-camera, but nothing on screen feels caustic or satirical. The laughs never take you completely out of the story, and they don’t stem from Miike being arch about his material; irony is a foreign concept.

Tarantino’s character appears again and, while his usual cringe-worthy acting is not totally debilitating in this context, casting the filmmaker is arguably Miike’s one major lapse in judgment, and the only sign he’s not completely immune to the anxiety of influence. It’s all the more remarkable, therefore, that a novel sensibility survives the many pressures shaping this well-trod terrain—a landscape not further parched by the rising sun but made more verdant and accessible than ever.