close
Flyboys is able to take off 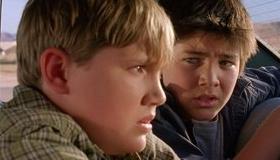 Kyle (Reiley McClendon), the new kid in his school, makes a friend in Jason (Jesse James) when he stares down the school tough guy. The appreciative Jason is an aviation geek and talks Kyle into sneaking onto a small twin-engine airplane that takes off before they can make their exit. The plane is key in a mob-type crime involving brothers Silvio (Stephen Baldwin) and Angelo (Tom Sizemore), and the kids are in the middle of it. Even this review setup is kind of thrilling in a taut Disney movie kind of way, as is The Flyboys, a film that one hopes at least half of the kids who rushed out to see The Dark Knight might give a shot. They’d like it better. It’s shorter and more fun, and features people who look and talk and act like them. But there is little if any TV support for The Flyboys, so those kids will not likely know it exists, and even if they do, they won’t care—no capes.

Oddly, The Flyboys is a good deal better than audiences might suspect for at least two reasons that might lead one to assume it sucks: actors Stephen Baldwin ( The Usual Suspects ) and Tom Sizemore ( Heat ). Yes, those guys, whom, you may recall, were exceptional actors before a myriad of bizarre incidents and circumstances— none of which we will mention here—turned them into celebrities rather than actors, let alone actors of note. Nominations are not necessary or suggested, but one wants to give credit where credit is due. They’re both great in this movie, as are young actors McClendon and James. This, along with a couple of actually breathtaking aerial moments, and no discernable CGI, makes The Flyboys one of the best action movies you could this summer. At least look for it on video.