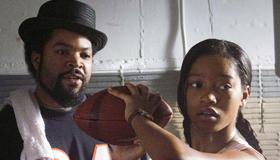 Former Limp Bizkit frontman Fred Durst directs his second feature with The Longshots, a family sports drama that’s pithy in its real-life origins, even if trite in its formulaic construction. The film tells the story of 11-year-old Jasmine Plummer (as portrayed by 14-year-old Keke Palmer of Akeela and the Bee ), the first female to play Pop Warner football, which to child football fans (the existence of which are astounding), was an unheard of thing. For fans of heartwarming, family-oriented Ice Cube movies (the existence of which are an enigma), it’s likely to be at least as engaging as Are We There Yet?, even if it isn’t a straight-ahead comedy as was that classic. And, it’s an Ice Cube movie, which means lots of middle-class white people who don’t care for either Durst or Cube’s music will take their kids to see it anyway, because somehow the very savvy Mr. Cube has fashioned himself as a paragon of family values, so long as he isn’t speaking in rhyme.

The story is straightforward: Young Ms. Plummer is a bit of an outcast in her integrated yet nevertheless lower-middle-class neighborhood, where her single mother (Tasha Smith) struggles to get along. Her uncle Curtis (Ice Cube), a former high school football star who has fallen on hard times along with the rest of the community, is distant and cool. To keep Jasmine from being alone after school, mom taps Curtis to play babysitter during those latchkey-kid hours.

As is typical with these sorts of movies, Jasmine and Curtis do not get along, until Curtis sees the young girl throw a football. Seems the kid is a natural. About 90 minutes later, Jasmine is playing in the big game for all the marbles as one might expect. The various likely outcomes of the “big game”—or its actual outcome, for that matter—aren’t terribly relevant and certainly not the point.

There is a “B” storyline here as well. It involves Jasmine’s no-account father, and though one presumes it’s at least as true as rest of the story, it seems superfluous at best and mean-spirited at worst. Palmer, who is too old for the role of Jasmine, truth be told, is evocative nonetheless. As for Durst, who is not a bad director by any means, there is still little evidence of a distinctive style, which makes him at worst a serviceable hand behind the camera, as he was behind the mic.