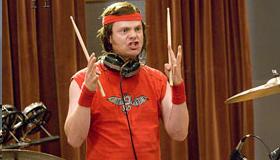 Although the world most definitely doesn't need another movie about an overgrown adolescent dragged by forces beyond his control into adulthood—in any case, that's why we have the Judd Apatow Repertory Players—this chip off the old School of Rock follow-your-dreams fable from Full Monty director Peter Cattaneo goes down pleasantly enough while you're watching, although if you bothered to think about it, you'd probably be annoyed. A tepid soundtrack and the lack of an outsize personality like Jack Black, however, would seem to bode ill for its commercial prospects, at least until home video.

Office co-star Rainn Wilson has the title role as Robert "Fish" Fishman, a 41-year-old seething cauldron of resentment/rock musician who 20 years earlier was thrown out of Vesuvius (a proto-typical ’80s hair metal band then on the cusp of stardom) and is now reduced to toiling at an insurance company and living with his sister and brother-in-law. Enter teenage nephew Matt (Josh Gad), whose high school rock band, A.D.D., has a gig playing the prom and no drummer. Fish, eyeing perhaps one last shot at the rock dream he (and nobody else, particularly) thinks he was cheated out of, volunteers for the show. When a video of the band rehearsing—featuring a not-exactly-svelte Fish in the buff—shows up on YouTube, A.D.D. becomes an internet sensation, and after signing with a major label, they hit the road for an actual tour along with the lead singer's mom (Christina Applegate) as chaperone. The usual wacky complications ensue, and the film finally climaxes with the now successful band opening for Vesuvius' induction into the Rock and Roll Hall of Fame (and if you haven't guessed that Vesuvius gets a massive come-uppance, you've probably never been to the movies).

Actually, it's a decent enough story, and while the characters may be stock—along with Matt and Fish, A.D.D. has a brooding, good-looking lead singer (pop idol Teddy Geiger) and a punkish girl bassist (Emma Bloom) who's secretly a softie—the cast is accomplished and likeable enough to keep you interested despite a certain laziness in the screenplay. (By my count, there are approximately 40 pop-culture jokes that are essentially variants of the original "I'm talking to you, Curly Sue" line delivered early on by the band's stereotypically weasel-ish manager, played by Jason Sudeikis.) The real problem, of course, is that Fish isn't all that interesting a protagonist. Despite Wilson's best efforts, the character as written is pretty much a garden variety jerk, a point the filmmakers (for whatever reason) underline with a cameo by Pete Best(!), the drummer fired by the pre-stardom Beatles whom history has long since decided is the most hapless loser of the second half of the 20th century. It also doesn't help that the music (by composer Chad Fischer) is mostly a forgettable pastiche of Fountains of Wayne and Weezer, or that neither A.D.D. nor Vesuvius are credible as bands with a mass audience. Vesuvius in particular are just silly: a cross between Mötley Crüe and Spinal Tap. They're so obviously clueless that it's all but impossible to imagine them having had two decades of success, let alone making it into the Hall of Fame.