close
Intermittent audacity, great performances and assured filmmaking from star/director Ben Stiller add up to one of the summer’s best and most brazen studio comedies 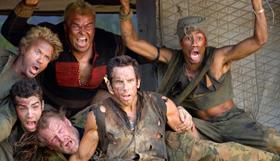 More a farce (in the classic, theatrical sense) than the satire it was predicted to be, Tropic Thunder is a far from perfect summer comedy, and it may have a small problem living all the way up to the very high boxoffice expectations its hilarious trailer has generated as a result. But in the end, Thunder ’s intermittent audacity and overall shagginess may be its most appealing attributes, and its potential audience is a huge one. Every time the film settles down into anything resembling the standard geometry of the genres it draws on—the Vietnam war movie, the caustic showbiz satire, the big-budget action film and, of course, the Ben Stiller comedy, which has become a brand all its own—some inspired bit of nonsense materializes and takes things into an unexpected and hilarious new direction.

Tropic Thunder is the name of the film within the film—a cliché-driven Vietnam picture with echoes of everything from Apocalypse Now and Platoon to the Rambo series embedded like arrows in its derivative hide. Choppers swoop, Steppenwolf and Buffalo Springfield tracks wail, and yet another thoroughly needless Hollywood wallow in American military trauma unspools before our eyes. But the egomaniacal actors aren’t cooperating, and when a big stunt goes wrong and the picture turns out to be “a month behind schedule after only five days of shooting,” director Damien Cockburn (Steve Coogan, in a sort of condensed-milk version of the more realized performance he’ll give later this year in Hamlet 2 ) is called on the carpet by a vicious studio boss (a brazen tour de force from a fat-suited, bald-capped Tom Cruise, portraying an ink-blot test of contemporary mogul-dom, with at least two current production chiefs the very obvious models). Damien’s solution: He will save his picture by stranding his prima donna players in an actual jungle, and then shoot them guerilla-style with handheld and hidden cameras for realism—a plan that goes awry instantly, stranding five actors armed with blanks and wearing period military gear in the middle of a jungle ruled by Burmese druglords. Hilarious complications ensue.

Star/auteur Ben Stiller has only directed a handful of previous movies (the most memorable for audiences was probably Reality Bites ), but his directing aspirations go all the way back to 1990 and The Ben Stiller Show, the 13-week flop that failed so badly Fox didn’t even broadcast its final episode, but which somehow launched not only Stiller’s career but that of Judd Apatow, Janeane Garofalo, Bob Odenkirk, David Cross and Andy Dick. The Stiller show was a great leap forward for TV sketch comedy, in that its mockery of the usual pop-culture targets almost always bypassed the direct celebrity impersonations that are Saturday Night Live ’s stock in trade and aimed at subtler parodies of the substance, syntax and generalized cynicism underlying so much visual media. From its brilliant opening sequence—three bogus “pre-title” trailers establishing the characters and careers of action star Tugg Speedman (Stiller, channeling Stallone), comedian Jeff “Fats” Portnoy (Jack Black, mocking multi-character Eddie Murphy fart-fests like The Nutty Professor ) and multi-Oscar-winning Australian method actor Kirk Lazarus (Robert Downey Jr., taking down Russell Crowe and Mel Gibson on his way toward Iron Eagle -era Louis Gosset Jr.), Tropic Thunder marks a clear and welcome return to the sketch-comedy priorities of Stiller’s influential television work.

The loose format, which allows Stiller to mock everything from the horrific visual clichés of the post- Saving Private Ryan war movie to the Oscar-baiting pieties of films like Forrest Gump and Rain Man, seems to have liberated Stiller both as filmmaker and performer. The generosity Stiller has always shown to other actors (no star working today is more committed to the notion of an ensemble) blossoms here, with Jack Black at last reminding audiences of why they thought School of Rock was so funny, and relative youngsters like Knocked Up ’s Jay Baruchel and the veritable unknown Brandon T. Jackson holding their own against a brace of more seasoned pros, including Nick Nolte and Matthew McConaughy, who both make a lot out of their showy supporting roles.

Downey Jr.’s brilliant performance as a white method actor trapped inside the cliché-driven black character he’s created for a movie is destined to be the most talked about thing in Tropic Thunder, and it deserves to be, not only because he’s characteristically great but because the audacity of the concept epitomizes what’s best about this picture. But race is far from the only hot button topic that gets poked in the eye with a sharp stick here. A partial list of the sacred cows Thunder reduces to gored oxen would include: panda slaughter and the Endangered Species Act; child warriors in the Third World; mental retardation and other handicaps; celebrity adoption of children from developing nations; and drug addiction—each of which would be either a “no-go zone” for a different type of comedy or a “serious topic” in another kind of Hollywood film. There are slack passages and unfortunate stretches where Tropic Thunder. coasts along on the very action clichés it’s supposedly sending up. But Stiller has broken out as a director with this one. And any movie comedy that mounts such a full-frontal assault on so many fetish objects of contemporary showbiz sanctimony has earned the very wide audience Tropic Thunder will undoubtedly reach.