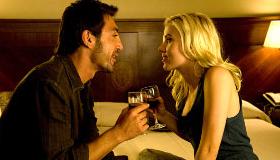 Woody Allen can be rather hit or miss these days, but his latest excursion to Barcelona produces a winner with spicy romantic entanglements and sparkling performances. The vibrant Catalan capital appears to have energized Allen after his London sojourn. The result is an effervescent romantic comedy celebrating the art of love in all its various guises. Box office prospects should be as sunny as the locales, plus the stellar chemistry of Johansson and Cruz is almost guaranteed to give it legs. The other plus for some is that Woody isn’t in it.

Vicky Cristina Bareclona plays on the conjunction of opposites. Two young American women, Vicky (Rebecca Hall) and Cristina (Scarlett Johansson), come to Barcelona for a summer holiday. Vicky is sensible and engaged to be married; Cristina is emotionally and sexually rapacious.

In Barcelona, they’re drawn into a series of unconventional romantic encounters with Juan Antonio (Javier Bardem), a charismatic painter, who whisks them both off for a weekend in a provincial town. Vicky is less than enamored with the proposal, but Cristina is captivated by his directness and charisma and persuades her friend to tag along. The trouble is that Juan Antonio remains involved with his tempestuous ex-wife Maria Elena (Penélope Cruz), who we learn may have attempted to kill him.

After returning to Barcelona, it is Vicky, rather than Cristina, who reveals slowly that she has become smitten—but the arrival of her fiancée (Chris Messina) cramps her style. Meanwhile Cristina has moved in with Juan Antonio, followed closely in a ménage à trois by Maria Elena, who has attempted to commit suicide. Because of her fragile state, Juan Antonio explains, she will have to be with them for a few months.
The performances of Bardem, Cruz, Johansson and Hall are delightfully inventive, with Cruz in particular relishing the tempestuous nature of Maria Elena and her tantrums. The real revelation, however, is Hall, an English actress and daughter of theatrical guru Sir Peter Hall, who lets slip that Vicky may not be as cool, calm and collected as she appears on the surface.

World premiered to wide acclaim at the Cannes Film Festival in May, this may not be vintage Allen, but it’s certainly the best thing he has done in a long time, and the array of star power should ensure healthy returns outside Allen’s traditionally faithful flock.