What We Do is Secret 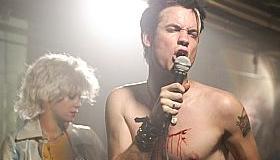 A low-budget but stylish recreation of the brief life and times of a pioneering LA punk band, What We Do Is Secret is fast and funny enough to make you overlook the fact that you’ve seen variants of this story before. Writer/director Rodger Grossman has the late ’70s milieu down cold, and Shane West’s performance as the band’s downward-spiraling lead singer is more than good enough to erase lingering memories of his work opposite Mandy Moore in the awful A Walk to Remember. A fun ’70s rock soundtrack and some hilarious turns in supporting roles should further endear this to genre fans; think Sid and Nancy with a lot more laughs but similarly limited commercial prospects.

First-time director Grossman’s What We Do Is Secret just may be the best-ever bio-pic of a band—in this case, seminal ’70s LA punkers The Germs and their doomed lead singer Darby Crash—that few people know and probably fewer care about, but while that may sound like faint praise, in this case, it isn’t. The story may be overly familiar—lots of sex, drugs and rock ’n’ roll (i.e, the usual mix of La Vie Boheme and The Road to Ruin )—but while Crash’s brief life may have been a bit of a cliché, Grossman’s account of it largely rises above the genre tropes thanks to an obviously genuine affection for the man and his—for want of a better word—art. It helps that he also has a smashing eye for sleazy period detail and a wicked sense of humor, and that he gets across-the-board fine work from an excellent cast. Former ER star Shane West’s brilliant impersonation of Crash (née Jan Paul Beaham) is the flashiest, but not necessarily the best, performance in the piece. In the end, of course, the film is little more than the old chestnut about a gifted but obnoxiously self-destructive jerk, and there are bits that you can see coming down the Sunset Strip from a mile away; the film was barely five minutes old, for example, before I found myself wondering exactly when somebody was going to say “I’m not gonna watch you die, Darby!” (According to my watch, the line was finally uttered about 65 minutes in.) But Grossman makes you feel for the big self-mutilating dummy despite yourself, which is no small accomplishment.

Why the Germs aren’t much more than a footnote to rock history probably has something to do with the fact that most LA punk didn’t travel well. Compared to their contemporaries in New York and the UK, a lot of the Hollywood bands were, frankly, posers. Crash, a bright, ambitious kid from a deeply screwed-up working/drugging-class family, was a little better than that, but not much. As Grossman shows him, he was one of many artiste wannabes back in the day who read Nietzsche in high school and thought it would be cool to flirt with Nazi themes without bothering with anything as mundane as learning how to play their instruments. In fact, when he and the rest of the Germs—particularly future Nirvana second guitarist Pat Smear (the excellent Rick Gonzalez) and long suffering bassist/muse Lorna Doom (Bijou Phillips, also very good)—first got started circa 1975/76, most of the other musicians in town thought they were a bit of a joke. But they improved very quickly, and by the time they more or less fell apart in 1980, they were pretty much the most influential and powerful performing band in LA, even though—as Grossman shows in hilarious detail—there were very few venues that would actually let them play, due to the gratuitous violence that followed them (and which they did little to discourage). Crash’s heroin addiction didn’t help much, either. The film ends with his OD (in real life, he died the night before John Lennon’s murder, although for purposes of dramatic irony, the film insists it was the same day), and there’s a real end-of-an-era feeling to the depiction.

The real Pat Smear was involved in the recreations of the Germs music on the soundtrack, and as a result all the band performances sound like the genuine article (of course, the fact that the real-life Crash could rarely be bothered to sing into the microphone probably simplified the recreations). Visually, Grossman gets everything right: Several sequences are more or less frame-for-frame restagings of the Germs footage from Penelope Spheeris’ pioneering LA punk-rock documentary The Decline of Western Civilization (of which the Germs were the de facto stars). In any case, in the end it hardly matters if you’re a devotee of the genre or the period; the actors and Grossman’s mostly pitch-perfect script hold your interest even if you don’t much care for loud noises. In fact, if this were a bigger-budget mainstream film, the wonderful Sebastian Roché (a genre fave since Peter Weller’s short-lived cable sci-fi series Odyssey 5, who’s now being wasted as a cartoon villain on the soap General Hospital ) would probably be Oscar-nominated for his role as a scene-making French journalist the punks can’t quite get a handle on. Similarly, another ER vet, JP Manoux, all but steals the picture with his hilarious dead-on impersonation of eccentric Los Angeles DJ Rodney Bingenheimer, a real-life mega-groupie who fancies himself a kindred spirit to a band who thinks he’s anything but.