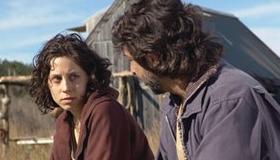 XXY is a coming-of-age film about a 15-year-old whose adolescence is further complicated by having both male and female characteristics. A contrived screenplay dilutes the unique story. This film has received several festival awards, including the Critics Week Grand Prize at Cannes. The uncommon subject could draw an audience looking for an obvious alternative to typical multiplex options.

Alex (Ines Efron) was born an intersex child, with physical qualities of both genders. Her parents have moved from Argentina to a remote coastal area of Uruguay so that their child could grow up quietly. Her mother Suli (Valeria Bertuccelli) had always wanted a girl, so Alex has been raised as a female. She regularly takes multiple medications to prevent masculine features from developing in her outward appearance.

Suli invites her friend Erika (Carolina Peleritti) and her husband Ramiro (German Palacios) for a visit. Ramiro is a celebrated plastic surgeon whom Suli hopes will perform the surgery to permanently make Alex a woman. Erika and Ramiro bring their introverted 16-year-old son Alvaro (Martin Piroyansky) along. Alex has been acting strangely. She has stopped taking her medications and has broken the nose of her male best friend. Her father Kraken (Ricardo Darin) becomes increasingly aware of Alex’s gender confusion and is against any immediate procedure.

Performances are effective, gradually revealing more of the characters’ hidden feelings. Efron’s Alex is quietly intense with a sullen exterior as she struggles to understand herself. Darin is particularly good, giving Kraken a continual weariness.

Director and screenwriter Lucia Puenzo is the daughter of director Luis Puenzo ( The Official Story ). XXY, her first feature, handles Alex’s condition with great sensitivity. She said that she was “especially interested in the dilemma of inevitable choice.” Her direction develops a sense of uneasiness throughout. Muted colors and shadows predominate.

Her script, however, based on a short story by husband Sergio Bizzio, sets up events that lead to some expected conflicts. Suli has moved her daughter to a secluded place to protect her daughter’s privacy, but she inexplicably arranges for Alvaro, who knows nothing of Alex’s situation, to share a bathroom with Alex where he can see all of her medications and quickly learn the details of her physical condition. Alex and Alvaro become attracted to each other, resulting in a startling physical encounter between the two young people where Alex takes a masculine position, emphasizing her growing uncertainty.

Symbolism becomes overly obvious. Suli, who wants an operation to forever define Alex as a woman, is filmed slicing down a carrot. Kraken takes care of wounded sea animals, and characters talk of “endangered species.” Ramiro’s insensitivity towards his son is constructed as a direct opposite to Kraken’s compassion toward Alex.