Year of the Fish 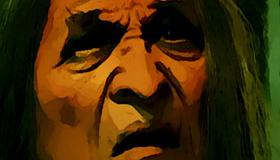 Watching this modern-day Cinderella story set in a massage parlor in New York City’s Chinatown, I wondered more than once whether writer/director/producer David Kaplan was inspired by something he read while dining at his favorite Chinese restaurant—on a white paper rectangle found inside a desert wafer perhaps? To be fair, his source was a ninth-century Chinese folk-tale. And the suspicion that Year of the Fish is the patronizing vision of a Jewish guy who has eaten so many Chinese meals he believes he’s half-Chinese is counteracted by the film’s tremendous visual appeal. Its unique look was achieved using a rotoscope animation technique, with watercolor-like images overlaying live-action shot on digital video. The commercial prospects of Year of the Fish are limited by its unsuitability for children (adult-oriented, though hardly explicit) and because, despite the universal charms of the Cinderella fable, interest will be muted outside of the animation and Chinese-American communities.

Kaplan’s debut feature is narrated by a fish and, rarer still, captures both meanings of the expression “happy ending”: the manually assisted conclusion to a massage and, more traditionally, a satisfying story that turns out well for deserving characters of either gender. Fate eventually smiles upon protagonist Ye Xian (An Nguyen), a naïve 17-year-old who arrives in lower Manhattan from China and immediately surrenders her passport to her father’s distant cousin Mrs. Su (Tsai Chin), the iron madam of the massage parlor where she’ll work until the debts incurred during her immigrant journey are paid off. Good fortune also shines on Johnny Pan (Ken Leung), a musician Ye Xian spies playing the accordion on a park bench during her first walk through the bustling streets. For the record, neither Ye Xian nor Johnny wants anything to do with the first kind of happy ending.

On that same outing, accompanied by the two sex workers who function as her stepsisters, Ye Xian also encounters a fortuneteller named Auntie Yaga (Randall Duk Kim). After speaking in riddles, the hag gives her a goldfish, the same creature that introduced the story in voiceover and will provide sage commentary at the end. Back at the parlor, faced with her first client, Ye Xian refuses to perform her yucky duty and is relegated to performing labor that’s even more menial. While scrubbing the floors, she must endure Ma Su’s wrath—which is soon directed at her rapidly growing pet fish—and also deflect the attentions of Su’s lecherous brother Vinnie (Lee Wong). The “ball” scene takes the form of a Chinese New Year’s banquet where Johnny’s band is playing; and the “slipper” scene goes down at the parlor, when Ye Xian’s prince rescues her from turpitude and servitude.

According to the press notes, the animation was created with an “advanced algorithmic digital painting technology” on four Macintosh computers over the course of just six months. The result is similar to the look of Richard Linklater’s A Scanner Darkly, but much softer and more fluid. It’s ideal for the storybook plot and quite dazzling at times. The visual aesthetic—like a quivering watercolor painting—matches the magical realism and mystical elements in Kaplan’s screenplay. I could have done without the thunderclaps, gongs and the oppressive score, which is heavy on the accordion (evidently not an instrument limited to evoking faux French nostalgia) and a gushingly romantic piano theme. Risqué and often-funny banter appropriate to the sex-industry workplace provides tang.

Chin ( The Joy Luck Club ) plays the evil stepmother with a gusto that borders on caricature, and a few of other actors flirt with stereotypes. Those sensitive to condescending screen depictions of Asians aren’t the only ones who might cringe at times. A scene in which Hispanic gang members menace Ye Xian could elicit complaints from Latino rights organizations. Kaplan is hoping we’ll focus on the fantasy and fortune-cookie sentiment with which the fish sums up the fairytale: “We all become dust someday. The most we can hope for is to love and be loved.” I’d settle for another movie that utilizes the rotoscoping animation process Kaplan has developed.