close
This is one film that should not remain hidden 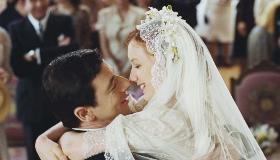 A Secret is a remarkable film with an unusual story set in occupied France. A young man learns the secrets about his parents’ lives during a perilous time. Strong at all levels, this film based on true events has the potential for wide appeal. It was extremely popular in France. The high quality and historical setting have the potential to attract a significant arthouse audience.

Bright colors and sunny exteriors emphasize the comfortable life 7-year-old Francois (Valentin Vigourt) is living in post-World War II France. He watches his mother Tania (Cecile de France, Avenue Montaigne ) complete a graceful dive into a swimming pool. When Francois feels ill, Tania protectively takes him home. His sportsman father Maxime (Patrick Bruel) does not hide his disappointment that Francois lacks his parents’ athleticism. Feeling his father’s continual displeasure, Francois imagines an older brother with the physical skills he lacks. Though the family is Jewish, Francois’ parents have him baptized as a Christian.

Francois’ parents have never told him of their life under the Nazi occupation of France. He envisions that they hid out and returned to Paris without any complications. When he turns 15, Louise (Julie Depardieu)—a close family friend and neighbor—tells Francois (now played by Quentin Dubuis) in parts the true family history, very different from anything he could have expected. His father was married to someone else—Hannah (Ludivine Sagnier, Love Songs ). There was a son—Simon (Orlando Nicoletti) who had the physical skills of Francois’ fantasy brother. This father and son spent enjoyable times exercising together in Maxime’s gym. Maxime and Hannah meet Tania, a swimming champion, the girlfriend of a relative.

Like many at the time, the assimilated Jewish characters are slow to realize the dangers they will face. Bruel’s Maxime has a futile belief his athletic acclaim will erase his ethnic origins and protect his family from any danger.

The fascinating screenplay co-written by director Claude Miller is based on a novel by Philippe Grimbert, inspired by the author’s family. In modern scenes, a grown Francois (Mathieu Amalric, The Diving Bell and the Butterfly ) who, like Grimbert, works with troubled children, deals with his aging father. Unlike the typical treatment of flashbacks, the modern sequences are in black-and-white, emphasizing the intensity of the past. The intersection of the different time periods is extremely compelling.

Miller, who was born in 1942, has said that as a boy and then as a teenager he was haunted by the Holocaust. Most of his aunts, uncles and grandparents did not survive the concentration camps. Like Maxime, his own father wanted him to be more of an athlete than he was so that he could never be led away without resistance.

Though much of the film is set during a time of historical upheaval, the emphasis remains on the personal relationships. Miller’s subtle direction focuses in the emotional undercurrents of the conflicted characters, including the growing attraction between Maxime and Tania. An excellent ensemble creates a diverse group of individualized portraits. Julie Depardieu received the Cesar (French Oscar) for Best Supporting Actress for her performance as the unconventional Louise. Knowing the make-up of Francois’ current family builds an acute tension into the flashback scenes. Some startling historical details add to the resonance of this Secret.