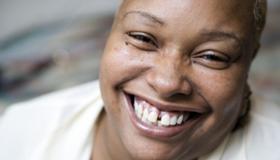 In this cogent documentary, Emily Abt delves into the personal dimensions of a major public health issue by profiling Dr. Mehret Mandefro, an Ethiopian-born, Harvard-educated resident at Montefiore Hospital in the South Bronx. Equally alarming, wrenching and inspiring, the film accompanies Mandefro as she begins a research project aimed at learning more about why black women make up 68 percent of new HIV infections in America and what might be done about it. The tagline “love and sex can mean life or death” implies the movie is aimed at scaring viewers into a different consciousness and behavior pattern; and, in fact, we’d all benefit if All of Us became part of sex-ed curriculums.

Moviegoers are bombarded with so many depraved and exploitative sexual images and scenarios that it’s refreshing to see a film in which certain harsh realities are dealt with candidly—but in an enlightening and constructive way free of hype or dour moralizing. Kerry Washington lookalike Mandefro is attractive, smart and caring. Abt’s camera follows her on home visits to AIDS patients Chevelle and Tara. Considering everything they face, the two Bronx residents are fortunate to be in her care. Their histories entail drug use, prostitution and much violent and abusive behavior. As Mandefro helps them concentrate on battling their illnesses and conducting normal lives, her research focus becomes politics in the bedroom—how race, gender and economic circumstances influence the power in sexual relationships. The most disturbing sequence involves Tara, who suffers from cervical cancer and yet finds it difficult to say no to her partner shortly after a major surgical procedure.

Watching Mandefro interact with the two women, consult with colleagues and visit relatives during a research trip to Ethiopia, we can anticipate where things are headed. Nevertheless, it’s still startling to hear that the good doctor herself has had unprotected sex with her boyfriend, whom she hasn’t known very long, suspects doesn’t share her deepening feelings and who admits to sleeping with other women. If she can make this mistake, anyone can. The call for female empowerment sounds like a tired cliché, but Dr. Mandefro’s story and example of intelligent concern gives it meaning and immediacy. Parallels between the young physician’s own relationship experience and that of her patients underscores the movie’s relevance. All of Us is the perfect title.